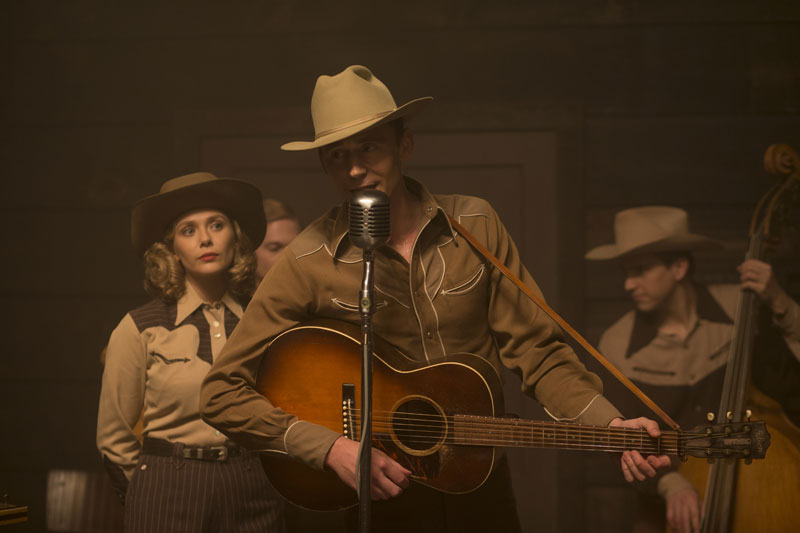 The question heading in to I Saw the Light, the new movie about Hank Williams, is whether Tom Hiddleston and Elizabeth Olsen, actors most widely known for playing characters in the Marvel Universe, can effectively portray the great but tragic C&W songwriter and performer Williams and his wife Audrey. The answer is a resounding yes. Whether I Saw the Light is a movie that actually sheds any new light on the story of Hank Williams’ sad, short life (he died at 29), the answer is no. Despite Hiddleston’s exceptional performance, the movie is dramatically inert, reworking the same basic idea again and again.

British actor Hiddleston transcendently captures the sound of Williams’ voice and his performative swagger, and it’s something that’s worth seeing for its amazing conjuring act. Williams’ difficulties with alcohol, amphetamines, morphine, and other painkillers (originally prescribed for his congenital back problem), as well as his womanizing and turbulent marriage to Audrey, who had more ambition than talent, are well-documented in other accounts of the artist’s life. I Saw the Light adds nothing new to the litany, and fails to expose the demons that led him down a trail of self-destruction. It thus becomes a very repetitive story: Get sloppy drunk, get to the next gig and perform beautifully (if he shows up at all), fight with Audrey (who wanted to share the spotlight with him) or his enabling mother (Jones), sleep it off, and get up and do it all over again. That his body gave out at the age of 29 while in the backseat of a car as he’s being driven to a gig, gives an idea of how hard he abused it. Writer/director Marc Abraham, who based the screenplay on Colin Escott’s 1994 book Hank Williams: The Biography, offers no insight into Williams’ artistic genius or his pivotal position in the history of American popular music. We get some sense of his enigmatic way through his relationship with manager Fred Rose (seen in archival footage, and played by Whitford), the Grand Ole Opry management who tried to deal with his alcoholism, and brief flirtations with TV (he appeared on The Perry Como Show) and movies (he’s shown taking a noncommittal meeting with MGM producer Dore Schary [Pais]), but these scenes are more enigmatic than explanatory.

I Saw the Light errs in the way that so many biopics do: by privileging the romantic over the professional. Instead of exposing the Yoko Ono in his life (the modern – and unjust – template for the love interest presumed to destroy an artist’s career), this film would be better off searching for Williams’ muse, the source of his talent. A more accurate title for I Saw the Light might come from the name of one of Williams’ other hits: “Lovesick Blues.” 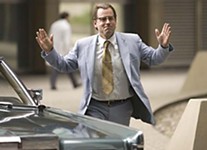 Flash of Genius
Based on the true story of Robert Kearns, who invented the intermittent windshield wiper only to have his idea stolen by the Ford Motor Co., is a real David and Goliath story.