There’s no absence of ambition in Dennis Hauck’s neo-noir Too Late, but that’s exactly the film’s problem. Emblazoned with ambition, this throwback Seventies-style private-eye movie (think Robert Altman’s The Long Goodbye or Robert Aldrich’s Hustle) seems more invested in its form than its content. Structure is more important than characters here, which is a shame when you have the terrific (and terrifically underused) John Hawkes anchoring the plot.

Let’s start with the fact that Too Late was shot in 35mm and, abiding with the filmmaker’s choice, will only be exhibited in 35mm in a few rare theatres still capable of projecting in this format. Beautifully filmed by Bill Fernandez, this L.A.-set drama captures both the city’s seedy outposts and sensuous geography. Yet the unwillingness to create a film transfer that might be seen by a wider audience seems a bit too precious. More than the Seventies gumshoe references, Too Late owes a debt to Pulp Fiction and Tarantino’s kaleidoscopic visual take on the City of Angels. Hauck structures this film into five single-take shots, which are not presented in chronological order. Each shot lasts approximately 20 minutes, and the unsung heroes of the movie, the camera crew, prove to be a nimble lot. Still, a viewer is more likely to follow the actions of the camera than the characters, whose relationships are revealed only gradually and spottily.

There’s no need to guess Hauck’s many stylistic influences; he announces them at every turn, from Alan Rudolph to Ms. 45. The film’s storyline, which spans three years, would probably be less intriguing if presented more conventionally. Hawkes (looking somewhat like an emaciated Sean Penn) is a private eye named Sampson, who’s on the hunt for an exotic dancer named Dorothy (Reed), who fears for her safety. Drug dealers, tangled intimate relationships, and sex-industry workers pop in and out, and lend color to the plot while convoluting it, often unnecessarily. Sometimes a stunning set-piece, like the drive-in theatre-cum-boxing ring, is enough to hold your attention. But then the bland use of an actor like Robert Forster (as the criminal strip-club kingpin) aches from missed potential. Dialogue ranges erratically between the delightfully hard-boiled to the awkwardly overcooked. In the end, Too Late’s self-absorption becomes its overriding characteristic. 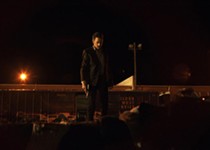