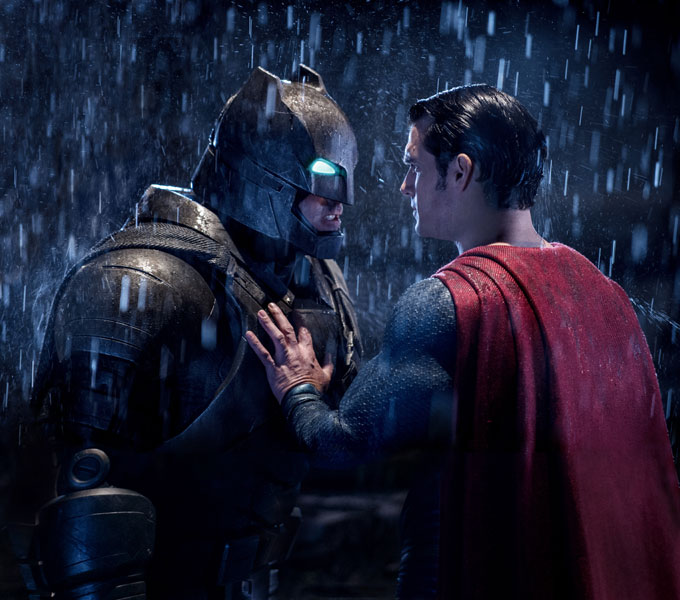 If you prefer your cinematic superheroics to have zip, zing, and the occasional touch of human emotion, you might want to steer clear of this epic and monstrously overwrought take on DC Comics’ two most popular characters, namely the Man of Steel (Cavill) and the Dark Knight (Affleck). Honestly, Wagner’s Der Ring des Nibelungen cycle feels like an antic 1930s screwball comedy compared to Zack Snyder’s seriously patience-trying Sturm und Drang that signifies, well, nothing much, apart from the dawn of the forthcoming Justice League – DC’s answer to Marvel Studios’ Avengers franchise. Granted, there are enough finely choreographed action set-pieces here to fill five other movies, and it’s a kick to see Bruce Wayne saddled under a costume that appears to have been manufactured from a tank. But Batman v Superman lacks the Marvel Universe’s sense of snarky reality and outsider empathy. There’s more heavy metals here than in all of Stark Industries’ underground bunkers.

Of course, the film is critic-proof, but as a longtime comic book (and film) nerd, I can say with some surety that Snyder has crammed too much of a great thing into his film, resulting in a super-slog that has just too much of everything. Specifically, I point to Jesse Eisenberg’s take on Lex Luthor, which feels way more Joker-ish than Luthorian. Then there’s the admittedly neat series arrival of – finally! – DC’s lone (for the moment) female superheroine, Wonder Woman, aka Diana Prince (Israeli actor Gadot), who shows up late and is given little to do, other than, you know, help save all mankind. Still.

This is a new super-tentpole franchise for Warner Bros. and DC, and as such it’s bound to be riddled with little nuggets of Kryptonian Easter eggs for keen-eyed fans. For the rest of us, it’s a flashy, smashy two-and-a-half-hour endurance test.