The Christian-centric Miracles From Heaven wears its faith on its sleeve: There’s never any doubt how this movie will turn out in the end. Based on the memoir written by Texas housewife and mother Christy Beam (Garner), the film chronicles the Beam family’s struggle with the debilitating illness of 10-year-old middle daughter Anna (Rogers) who’s diagnosed with a terminal intestinal disorder that requires nourishment through feeding tubes and usually ends in premature death. Aside from the physical and emotional anguish Anna suffers, her infirmity takes its toll on her parents and siblings as well: marital discord, maxed-out credit cards, forgotten commitments, and the everyday stress about what tomorrow might bring. It’s a life turned upside down for everyone, particularly for a spiritually distressed mother who can’t comprehend how God could inflict such a terrible thing upon her child. When a freak accident in the film’s third act takes the narrative in a different direction, Miracles From Heaven begins to gently proselytize, ending with a church service featuring a heartfelt homily on the meaning of faith and the nature of miracles. (The film’s structure recalls the storyline of the 2014 film Heaven Is for Real, in which another youngster reports an afterlife visitation taking place during a near-death experience.) Whether these healing words resonate will likely depend upon your willingness to take a leap of Christian faith.

As Christy, Garner gives an earnest performance, her perpetually worried expression put to good use here as the Beams grapple with the unimaginable possibility of losing Anna. There’s an inherent goodness and kindness in this actress, which can work both for and against her, depending on the role. (While Garner had the least showy role in Dallas Buyers Club, she anchored the film.) But the movie never allows her to truly plumb the depth of her character’s despair, which would have made the uplift of its message all the more effective. Remember when Everyman George Bailey loses all hope in that Christmas chestnut It’s a Wonderful Life? Seeing Jimmy Stewart’s good guy come apart at the seams may be one of scariest things ever seen on film, but when George’s convictions are renewed, the epiphany is divine. If only movies like Miracles From Heaven dared to go that far to communicate their life’s lessons. If only they had the faith in their audiences to do so. 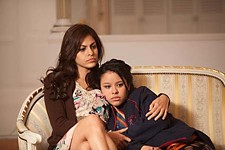 Girl in Progress
The roles of mother and daughter get mixed up in this old story told in a smart way.