As war comedies go, Whiskey Tango Foxtrot is no M*A*S*H*, but it still surpasses other recent comedies of this ilk, such as last year’s Rock the Kasbah and Our Brand Is Crisis. Adapted from journalist Kim Barker’s first-hand account in the book The Taliban Shuffle: Strange Days in Afghanistan and Pakistan, Whiskey Tango Foxtrot has been fashioned by Tina Fey’s writing partner Robert Carlock as a vehicle for the popular comedian. The first alteration in WTF is to change the character’s name from Kim Barker to Kim Baker – presumably to create more creative distance between the book and the movie.

The humor here is more wry than har-har, which is a relief after Fey’s Sisters, which was released just three months ago. That’s probably the correct course to take since American boots are still hoofing the ground there, albeit in smaller numbers. In fact, WTF is more a story about a woman’s decision to disrupt her career path in order to shake up her life, and has little to do with finding or keeping a mate (although Baker is hardly starved for male companionship in the film). Before seizing the opportunity to become a war correspondent, Baker worked as a news writer and producer in a bland but safe U.S. office. She finds purpose, adventure, and a good time in Kabul, and in time falls victim to the adrenaline rushes that other war reporters have been known to chase. Interesting are the film’s contrasts between the daytime horrors of life during wartime and the nighttime gaiety indulged in by the international corps of reporters, who all seem to lodge in the same frat-house-style boarding house. They refer to the strange atmosphere they dwell in as the Kabubble.

The film shares some of the similarly seriocomic awkwardness that writers/co-directors Glenn Ficarra and John Requa evidenced in such previous films as I Love You Phillip Morris and Crazy, Stupid, Love.. Although they’re only on board as the co-directors for WTF, they’re unable to delineate a clear path through the chaos and Kabubble, but it’s easy to see why Fey would turn to them following their direction of funnymen Jim Carrey in Phillip Morris and Steve Carell in Crazy, Stupid, Love., middlingly successful though these films were. The film’s casting choices have been widely second-guessed by the press and the public for placing the English-speaking actors Christopher Abbott and Alfred Molina in the roles of Afghan nationals (despite both men turning in superlative performances). To this, the filmmakers might be wise to embrace the movie’s closing moral: “Embrace the suck, and move the fuck forward.” WTF is on the right track, even if it never pulls all the way in to the station. 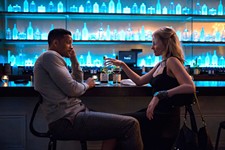 Crazy, Stupid, Love.
This generally appealing romantic comedy is occasionally ungainly, but its sensational cast breezily flicks away most distractions.