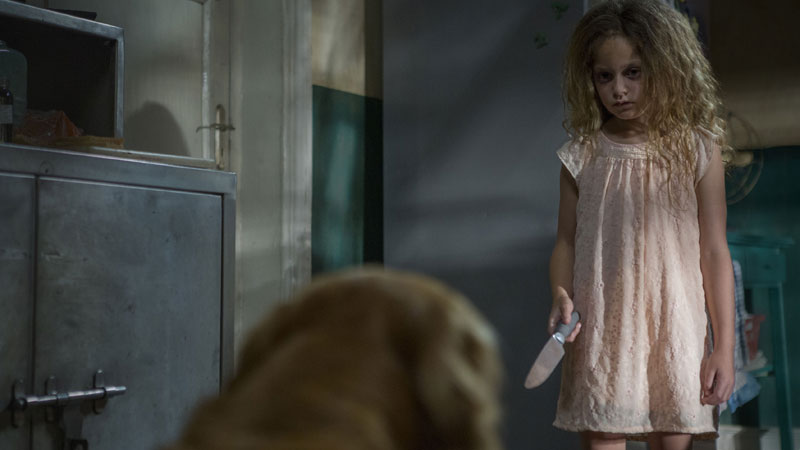 The Other Side of the Door

As far as the plot goes, there’s nothing that surprises in The Other Side of the Door, a horror film in which a grief-stricken mother opens a forbidden portal between the living and the dead. However, atmospherically, this film forges a subgenre that can be best-described as Hindu Gothic. A portentous Gothic gloom hangs over the film, replete with eerie sounds and imagery that spook more than scare the characters. Yet the Mumbai-set tale is stocked with figures of Hindu gods and other iconography, amplified by the bereaved husband’s career as an antiquities dealer. It makes for a blend I don’t recall ever seeing before.

The story, however, you’ve seen a hundred times over. It’s one of those movies in which as soon as the words, “You must not open the door,” are uttered, you can predict everything that will follow (that is, unless you weren’t already clued in by the film’s title). Maria (Callies) and Michael (Sisto), are an American couple who decide at the start of the film to start a family and stay in Mumbai to raise their children. Shortly thereafter, a terrible accident takes place in which Maria is forced to make a horrific Sophie’s Choice. Unable to emotionally recover, Maria follows the suggestion of her servant Piki (Pillai) about visiting a portal where there is a very thin line between the living and the dead, so that she can say a final goodbye to her dead son. But Maria makes the same dumb choice that women always make in horror films when they disobey specific instructions to not go into the basement, the woods, et al. Afterward, all hell, quite literally, breaks loose.

Effective performances by the principals are unable to surmount the movie’s many cliches, although the actors render them more endurable. A more evocative title for this Hindu Gothic might be: Mommies Shouldn’t Play With Dead Things.