Love and creativity rarely come easily, but when interlaced with bipolar disorder these passions become infinitely more complicated. Touched With Fire tells the story of two young bipolar poets, Carla (Holmes) and Marco (Kirby), who meet in group therapy, fuel each other’s mania, fall in love, and further their relationship in the world beyond the boundaries of the mental institution where they met. Are they soul mates or delusional romantics?

That’s just one of the questions raised by Touched With Fire, the first feature film by writer/director Paul Dalio, who also co-edited the film and composed its music. It is executive-produced by Spike Lee. The film is grounded in Dalio’s personal struggle with manic-depression and exudes an air of authenticity for having passed through that crucible. The performances of Katie Holmes and Luke Kirby also lend the film a sense of genuine grace because of their depiction of characters whose thoughts and actions can be a source of bewilderment to themselves, as well as others. The movie is an actor’s gift.

Inspired by Kay Redfield Jamison’s 1993 book Touched With Fire: Manic-Depressive Illness and the Artistic Temperament, the film latches on to the idea that much of the world’s great art came about as a consequence of bipolar manias. A long list of artistic exemplars from the history of music, visual arts, and letters is offered in the film’s closing dedication. Would Van Gogh have given the world Starry Night, or Munch The Scream, if either one of them had been on lithium? The poets Shelley, Byron, and Pound, along with the writers Virginia Woolf, F. Scott Fitzgerald, and Eugene O’Neill, and musicians Charlie Parker and Tchaikovsky are among the many figures posthumously diagnosed here. An interesting theory, no doubt, and probably true in some cases. But it relies on the romantic notion that artistry is an instinctual expression rather than the result of conscious creation and applied aesthetics. A common thread in the treatment of manic-depression is that patients frequently go off their mood-stabilizing meds to chase the liberating (and creative) highs of their manias, and this becomes one of the essential problems faced by Carla and Marco as they try to build a life and future together. Until the point at which the characters go to visit with Jamison, Touched With Fire seems to espouse the artistic benefits of living free of meds. Jamison, herself bipolar, extols the benefits lithium has had in helping herself productively manage her life and work.

Even though the story’s outcome is fairly predictable, along the way several sequences allow us to experience a sense of the disease’s highs and lows, as well as the conflicts faced by the patients’ families. There is no doubt the film is exquisitely felt, yet Touched With Fire often feels like a David and Lisa redux for the psychotropic drug era. 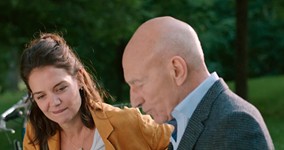