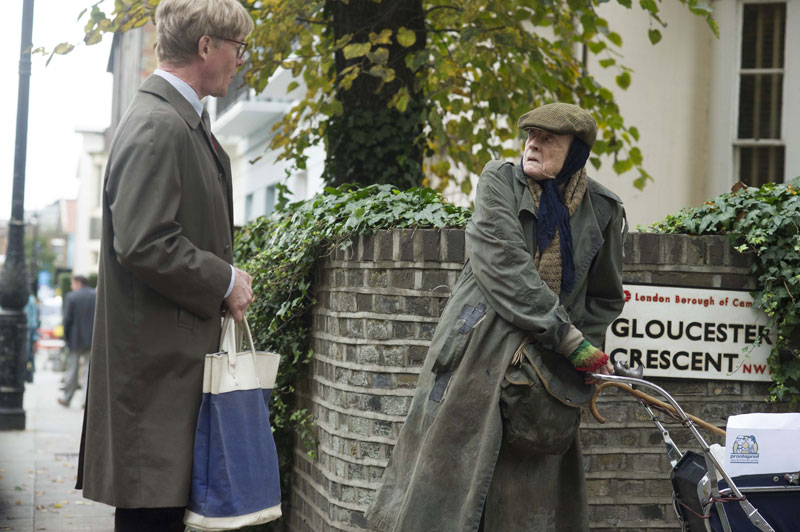 The Lady in the Van

The movies tend to infantilize the geriatric generation, often regressing the elderly for comic or sentimental relief. Thankfully, the “mostly true” Lady in the Van doesn’t stoop to condescend in this manner, though it gets a little long in the tooth after its titular eccentric trades her vehicular abode in for a heavenly chariot. Based on British playwright Alan Bennett’s comedy/drama performed on the West End in 1999, the film (also scripted by Bennett) episodically recounts the odd relationship between the dramatist (Jennings) and the homeless Miss Shepherd (Smith), a cantankerous, stubborn, and decidedly malodorous old lady who lived in a broken-down van parked in the driveway outside his Camden home for 15 years. The persnickety Bennett depicted here is a man who has long resisted emotional responsibility for anyone, including a mother whom he keeps at arm’s length even as she slowly succumbs to dementia. But his reluctant decision to connect with his frequently maddening curbside neighbor marks an important retreat from the isolated world in which he has chosen to reside. (To emphasize this internalization, the film employs a narrative device that manifests Bennett as two persons engaged in an ongoing inner dialogue. It’s a mixed bag, at best.) Miss Shepherd may aggravate Bennett to no end, but the more he learns about this interloper’s mysterious past – she was a gifted pianist and a former nun who’s fluent in French, among other things, a woman who cannot forgive herself for a terrible thing that occurred years ago on a secluded country lane – something awakens within him. Sure, he’s mentally formulating a memoir about this most unforgettable character from day one, but her presence in his insular life also tugs at him to become a better person. It may not sound like much of a storyline, but there’s a subtle beauty in the ability of human compassion to cure one’s shortcomings.

Of course, the film’s showpiece is another incomparable lady, the always amazing Maggie Smith. In a film career that has spanned over half a century and earned her beaucoup accolades, including two Oscars, she is acting royalty, even when she plays a character living in filthy squalor and clothed in several soiled layers of cast-off garb. (Notably, she was appointed as a Dame Commander of the Order of the British Empire in 1990.) The dilapidated van in which Miss Shepherd lives is a far removed from Downton Abbey, but Smith inhabits the character’s less-than-stately surroundings with the same uncompromising truth. The way she moves in that bulky ragtag attire, the way she way she cocks her head, the way she rambles on, sometimes in circles, sometimes in straight lines – it’s a remarkable physical performance in the works since Smith portrayed the character on the London stage over 15 years ago. When grime no longer covers the sickly Miss Shepherd near the film’s end, you see (for the first time) the frailty and softness this peculiar woman has hidden from the world for so, so long. It is heartbreaking and lovely and heartbreaking again to experience this moment of clarity. Shout it from the mountaintop: There is nothing like a Dame. 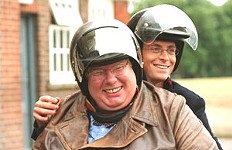