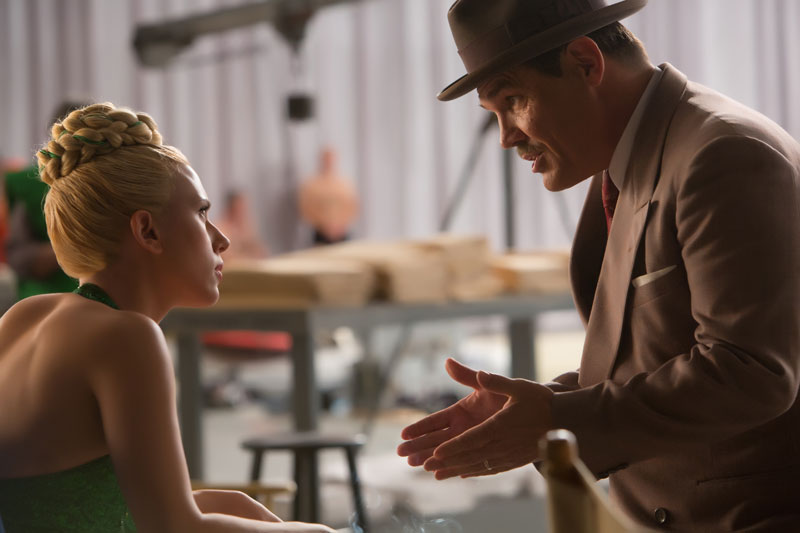 Dateline, Hollywood, 1956: The times are fraught. Commie fifth columnists, Red dupes, and the Cold War are in full swing and the first hydrogen bomb has recently obliterated a sizable chunk of the Bikini Atoll. Over at Capitol Pictures, however, life is even more complex for overworked but relentlessly efficient studio “fixer” Eddie Mannix (Brolin), a sturdy Catholic family man whose full-time job is keeping the studio’s nonstop parade of egocentric, narcissistic, and just plain lunkheaded actors, directors, and extras in line and out of the gossip columns. Currently, Mannix is dealing with the unexpected pregnancy of unmarried actress DeeAnna Moran (Johansson, biting off the snappy dialogue in pure Brooklynese), the career shift of cowboy actor Hobie Doyle (Ehrenreich) into a stuffy period drama star, offers of a cushier gig over at aerospace manufacturer Lockheed, and topping it all off, someone has kidnapped actor Baird Whitlock (Clooney), the star of Capitol’s still-unfinished tentpole production, Hail, Caesar!: A Story of the Christ. It’s a dirty job but someone’s got to do it.

Hail, Caesar! is something of a return to comic form for the Coens after the much-lauded but enervating Inside Llewyn Davis and 2010’s True Grit. The new film packs enough distinct plot lines into its relatively brief running time to fill out three lesser movies, and yet it still never quite manages to gel all the way. Indeed, there’s so much going on at any given moment that it’s easy to get swept up in the antic chaos onscreen without realizing it’s all much ado about not all that much. Which isn’t to say that Hail, Caesar! isn’t great fun. It is, especially to students of old Hollywood and in particular MGM, where the real-life Eddie Mannix held roughly the same position as Brolin’s fictional counterpart, albeit one where suicides, mob collusion, and murder were the real topics of the day. (For the actual lowdown on the real-world Mannix, check out Karina Longworth’s podcast You Must Remember This.)

Parodying something they love, namely MGM’s family-friendly slate of Forties/Fifties biblical epics and elastic musicals, while keeping everything spinning in the orbit of planet Coen, Hail, Caesar! is at its best during its genuinely dazzling riffs on classic MGM set-pieces. Particularly excellent is an eye-popping Anchors Aweigh-influenced song-and-dance number with Tatum in the Gene Kelly role, as well as Johansson’s splashy turn recalling Esther Williams in Million Dollar Mermaid.

The cast is Coen brothers through and through, too, with a substantial number of semi-cameos from the likes of Fiennes as a foppish director (possibly patterned on Vincente Minnelli), Swinton as a pair of dueling, twin gossipmongers, and McDormand, as a studio editor and literal fashion victim. Hill also gets a couple of choice lines as the fixer’s fixer, Joseph Silverman, and Clooney’s dunderheaded Baird is some of the actor's best comic work since O Brother, Where Art Thou?

A comic goldmine for those who know the truth behind the studio legends and a wacky treat for everyone else, Hail, Caesar! is held together by the aforementioned sequences and Brolin’s serio-comic take on the ever-serious Mannix. It’s both more and less than the sum of its parts, but its never less than thoroughly watchable.