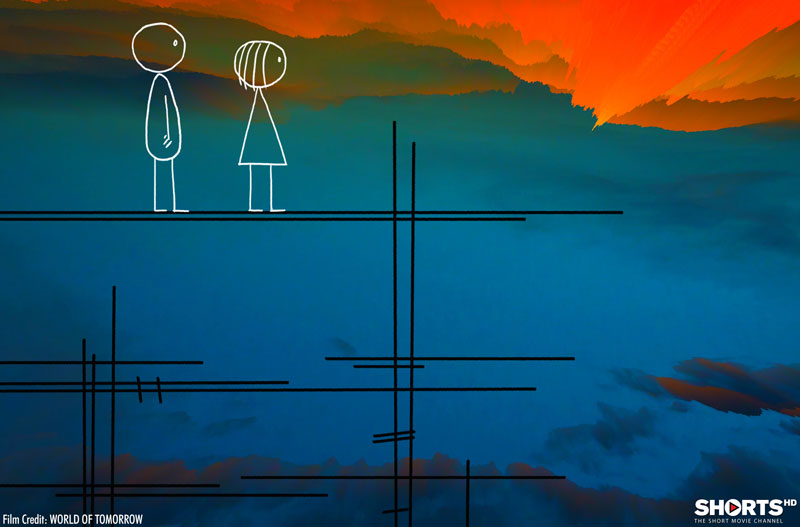 I’m not even going to attempt to hazard a guess as to which of these five short animated films from across the globe is going to nab the coveted golden statuette. Suffice it to say that with the inclusion of the Pixar-produced “Sanjay’s Super Team,” which follows the superhero-inflected imagination of a young Indian boy as he fantasizes his way around his devout Hindu father’s morning prayers, the Animated Shorts nominations are more racially inclusive than the disappointing #OscarsSoWhite main event. Directed by Sanjay Patel, this semi-autobiographical short (which screened in theatres before The Good Dinosaur) is kaleidoscopically spectacular, a riot of candy-colored hues and anime-influenced imagery as little Sanjay transposes himself into a world where the true superheroes are Krishna, Lakshmi, and Lord Hanuman.

“Bear Story,” the Chilean entry from director Gabriel Osorio, employs remarkably intricate stop-motion animation to tell the story of a lonely papa bear who crafts a miniature clockwork world of his life. The scenarios may be melancholy, but the animation is flawless and recalls the work of both the Brothers Quay and Jean-Pierre Jeunet.

UK animator Richard Williams ups the ante with a chaotic whirlwind of life, death, and gladiatorial warriors in “Prologue.” The photorealistic, pen-and-ink animation style feels like a life drawing class in ancient Sparta, all muscles, brawn, and bloodshed, making this the only nominated animation unsuitable for younger viewers.

Despite its title, the Russian entry, Konstantin Bronzit’s “We Can’t Live Without Cosmos,” has nothing to do with either Neil deGrasse Tyson or Carl Sagan, although I suspect both would appreciate this humorous and high-flying take on a pair of cosmonauts who just … can’t … even … wait to soar beyond the stratosphere and into the final frontier. Cartoonishly done, the denouement is unexpectedly moving.

And then there’s Austinite Don Hertzfeldt’s nihilistically comic “World of Tomorrow,” a mixed-media mash-up of the animator’s favored theme of despair, Philip K. Dick-influenced dystopian paranoia, and Hertzfeldt’s then-4-year-old niece’s coos and babblings. Backgrounded by radiantly depressing CGI, Hertzfeldt’s stick-figure characters – a toddler visits the future with help from her thrice-cloned self – are as heartwarmingly miserable as ever. More, please.

A few non-nominated animated works are included on the bill to round out the program.