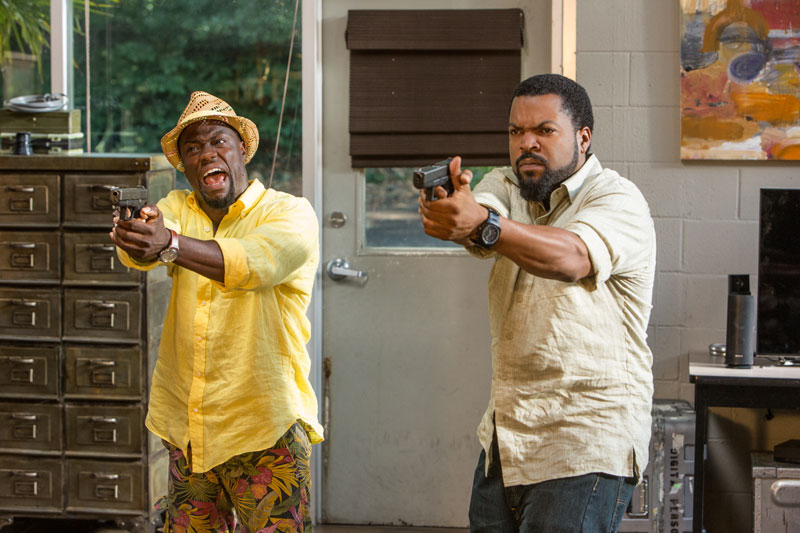 Feel like you’ve ridden along on this journey before? It was nearly two years ago to the day that the first installment of this comedy starring Ice Cube and Kevin Hart as mismatched cops came out. If you enjoyed that vehicle, then by all means, flag down the new jalopy: It rides the same and the upgrades are kept to a minimum.

Cube maintains his signature scowl throughout, while Hart does his antic motormouth thing. The combo works in a kind of Abbott & Costello way, but I have to admit that I’m not big on the appeal. Cube is Detective James Payton and Hart is Officer Ben Barber, a rookie cop who is about to become James’ brother-in-law. The backstory played out in the original film, in which Ben was a lowly security guard who longed to become a cop, and in an attempt to prove his worth by helping James, gums up the caper at every turn until he, accidentally of course, saves the day. In the new adventure, Ben is now a probational cop who tags along with James when the detective is sent from Atlanta to Miami to query a source. Miami? Cue the Gloria Estefan music, bikini shorts, and the colorful wardrobe worn by Hart for comic effect.

Although the plot is pretty bare-bones, it’s propped up by plenty of gratuitous dialogue and imagery that do nothing to further the story. Playing a computer hacker, Ken Jeong adds some additional laughs, although he seems perfectly subdued in contrast with Hart. Benjamin Bratt adopts a thick Latino accent as the bad-guy businessman, while Olivia Munn plays a tough Miami detective who’s costumed in revealing outfits. The action scenes are perfunctorily shot, except for one sequence that plays out like a video game, allowing Ben to make use of his prodigious joystick skills. Tyrese Gibson also makes a cameo appearance.

Releasing films at the outset of the long Martin Luther King Jr. Birthday holiday weekend has become something of a tradition for Ice Cube as he’s stepped into the role of producer as well as star. The first Ride Along came out two years ago this weekend, and the films Next Friday, First Sunday, and Are We There Yet? all targeted the holiday for their openings as well. Sure to rake in big, opening-weekend box office dollars, there still must be a better way to demonstrate that black lives matter than by throwing the community’s money at a dopey cop comedy.