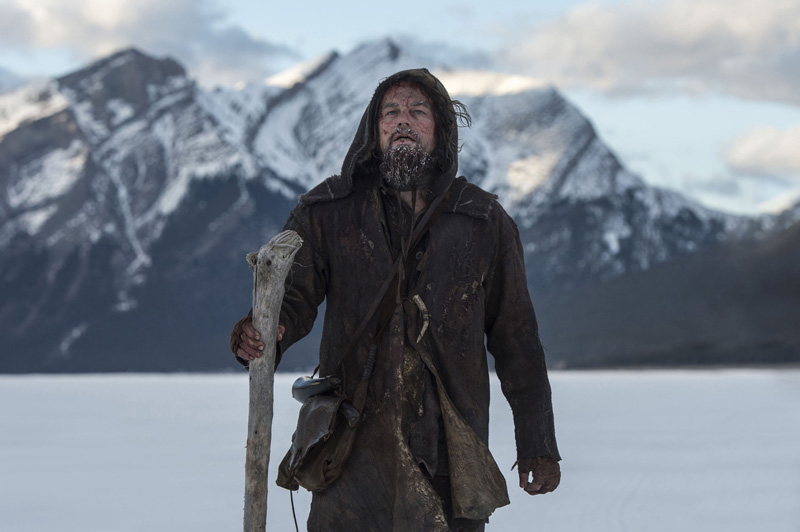 The most punishing movie of 2015, The Revenant, is almost as brutal an experience for the viewer to watch as it is for its title character Hugh Glass (DiCaprio) to undergo. That’s not meant as a knock, but rather as a warning that the film may leave you as near-speechless and mono-minded as its battered returnee from the dead. Not since Mel Gibson’s The Passion of the Christ have we witnessed a film’s central character endure this many mortifications of the flesh and austere self-abnegation during the course of one film. Hugh Glass is no Christ figure, however; he is an obsessed father who lives to track down and exact revenge on the man who murdered his son.

Iñárritu’s follow-up to his multi-award-winning Birdman or (The Unexpected Virtue of Innocence) unfolds in an entirely different tone and setting, although The Revenant’s heartless cruelty may recall imagery from some of Iñárritu’s earlier films, such as Amores Perros and 21 Grams. Set during the 1820s in the unsettled America lying west of the Missouri River (the future North Dakota or Montana), The Revenant tells the survival story of frontiersman, explorer, and fur trapper Hugh Glass, who was a real person about whom not much is known.

The film is based in part on the novel by Michael Punke, and opens with magnificently choreographed and filmed action sequences during which the fur-trapping party is forced to beat a hasty escape after a deadly surprise attack by Arikara warriors. (The Revenant was shot by Emmanuel Lubezki, winner of the last two Academy Awards for Cinematography – 2014’s Birdman and 2013’s Gravity – and his contributions to this 2015 Western cannot be underestimated.) While out hunting for provisions for their overland trek to the nearest fort, Glass is viciously mauled by a mother bear protecting her cubs (and, no, DiCaprio is in no way, shape, or form raped by the animal). Captain Henry (Gleeson), the organizer of the trapping party, whose numbers are now severely diminished from their original 100, decides to leave behind Glass and his mixed-heritage son Hawk (Goodluck), to be watched over by two trappers, John Fitzgerald (Hardy) and Jim Bridger (Poulter), who will presumably bury the unconscious Glass once he passes. But Fitzgerald is a particularly impatient, ill-mannered, and racist individual, and before long, Glass is abandoned in the harsh, snow-covered wilderness without provisions, weapons, or his son. But Glass regains consciousness, and the rest of the film is a slow death crawl toward recovery and revenge for Hawk’s murder.

Wrapped in a putrid bearskin, Glass’ solo trek back to the fort is marked by numerous indelible sequences (perhaps the most memorable being his gutting of a dead horse and climbing inside to sleep amid the warmth of its bowels). Visceral moments like this are one of the hallmarks of Iñárritu’s cinema, and his talent for fashioning these unforgettable gut-punches seems more acute than his overarching ability to weave together a continuous narrative. Many of his previous films have blended together or contrasted collections of characters or short stories rather than presenting one fluid narrative. DiCaprio is always fully engaging to watch, even when there aren’t many plot details to focus on other than the progression of the character’s bodily damage. It’s a heroic performance; Tom Hardy, who is almost unrecognizable in the supporting role, is no slouch either. Nevertheless, at 156 minutes, Iñárritu’s film seems like there could have been room for thematic flourishes more provocative than basic survival and revenge. Dare we say that in this Western, Iñárritu sometimes loses the forest for the trees – mighty though those trees are.