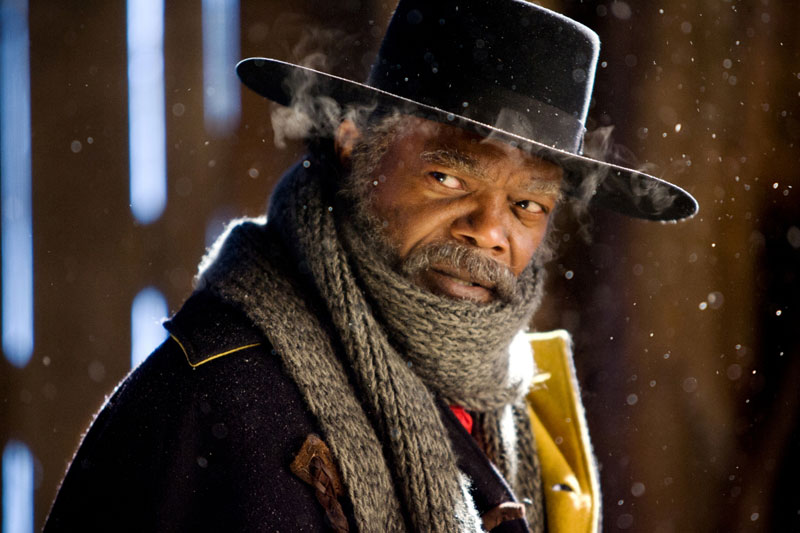 The eighth film by Quentin Tarantino, as the full onscreen title reminds us, feels like a companion piece to the iconoclastic director’s previous Django Unchained. Both films can be seen as QT’s none-too-subtle position on the deplorable state of race relations, and the deadly echoes of slavery in the United States. Tarantino’s message has always been crystal clear, if blood-spattered: Racism, any racism, is wrong, then and now. That enlightened mindset runs quick and true through all 167 minutes (or 187 minutes in the 70mm roadshow version, which includes overture and intermission) of The Hateful Eight.

Kurt Russell is John “The Hangman” Ruth, a bewhiskered bounty hunter first glimpsed through the window of a stagecoach traversing the Wyoming badlands in a hellacious snowstorm. Sitting beside him is his captured quarry, the killer Daisy Domergue (a startling Jennifer Jason Leigh). They’re on their way to the town of Red Rock. Soon, they pick up a third passenger, the corpse-bearing bounty hunter and former Union soldier Major Marquis Warren (Jackson), and then the ex-Confederate soldier Chris Mannix (Goggins), who may or may not be the new sheriff of Red Rock. And then there were four. Stagebound paranoia and pissing contests quickly ensue.

With a blizzard looming and no chance of beating it to Red Rock, the quartet and their driver O.B. (James Parks, son of actor Michael Parks) stop for the night at Minnie’s Haberdashery. There’s no sign of Minnie, but there are four other travelers already inside. There’s Dern as the aged but still ornery Confederate officer Sanford Smithers, an English dandy (Roth) who claims to be Red Rock’s new executioner, cowboy Joe Gage (Madsen), and doleful Bob (Bichir). Seeing as how there’s a $10,000 bounty on Daisy’s head and nobody’s totally sure of anyone else’s agenda, this scenario makes for some choice and lengthy Tarantino dialogue and a bravura performance from Jackson, among others. The less said about the specifics of the narrative, the better, although one can safely assume that there will be blood, and plenty of it.

Tarantino hired Ennio Morricone to do the orchestral score (plenty of QT’s trademark Sixties pop tunes are heard, too) and, fittingly, the composer has repurposed some unused cues from John Carpenter’s The Thing. The Hateful Eight has almost too much in common with Carpenter’s film, right down to the slow but memorable decimation of core characters and Kurt Russell’s smart but boozy role. Longtime fans of the director will also note a certain structural resemblance to Reservoir Dogs. Overall, it’s a satisfying wintry treat, as only Quentin Tarantino can do it.

Shot on film with Ultra Panavision 70mm lenses by Tarantino regular Robert Richardson, The Hateful Eight is being released in two different versions: a “roadshow” that runs slightly longer and will screen only in selected theatres (two in Austin) beginning on Christmas Day, and the “regular” one, which is shorter but supposedly contains alternate scenes, and opens wide on New Year’s Day. All things being unequal, I’d say try to get into one of the 70mm, nondigital screenings. But be quick, they’re selling out fast. 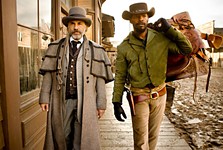