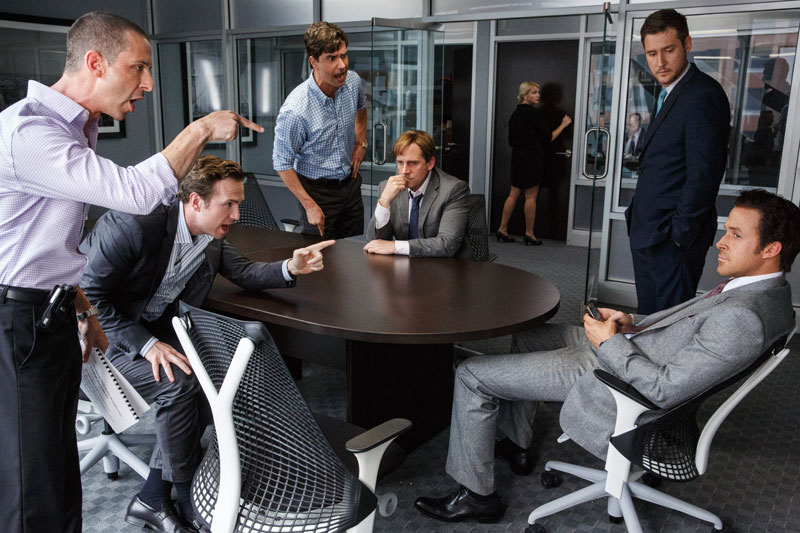 The director of the sublimely silly comedies Anchorman: The Legend of Ron Burgundy and Talladega Nights: The Ballad of Ricky Bobby, Adam McKay is the last guy you’d expect to tackle the complex lead-up to the financial meltdown of 2008, a world-shaking event that was as serious as a heart attack. But then, McKay is also the co-founder of comedy site Funny or Die – a name that suggests an almost-grim commitment to merrymaking – and there’s something of the same spirit to his direction here. McKay makes moral outrage wickedly entertaining.

For starters, if you’re going to take a deep dive into the credit fiasco, it’s a wise choice indeed to cast movie stars like Steve Carell, Ryan Gosling, and Brad Pitt, who ably harness their considerable charisma to explain collateralized debt obligation to the popcorn-munching masses. (A host of less famous but top-notch character actors deepen the bench.) Adapting with Charles Randolph the nonfiction bestseller by Michael Lewis, McKay is all sleight of hand, using a zippy pace and regular punchlines to make more palatable the befuddling specifics of the banking crisis. Even so, a momentary drift induced panic in me – wait, what did I miss?! – but the filmmakers know they’re dealing with an attention-deficit audience; the action regularly stops for interstitials in which the likes of Margot Robbie and Selena Gomez speak straight into the camera, restating complex issues in layman’s terms.

Breaking the fourth wall has the danger of breaking an audience’s tenuous relationship to a film – you have to believe in the truth of a particular fiction – but McKay throws so many techniques at that wall right from the start that you learn early to adjust your equilibrium. You don’t fight the waves, you shift with the ship as it courses over them. Everything here is heightened. Sometimes the camera mimics verité technique (although it’s closer to the winking documentary style of The Office). Stock footage gives some scenes the feel of a commercial film. A laugh track underscores the absurdity of one scene. The characters are outsized, most especially that of Christian Bale, playing a savant hedge fund manager with Asperger’s and a glass eye. It’s an intentionally mannered performance, which makes Bale’s ability to tap pathos from so much twitchiness all the more remarkable.

For all its plainspokenness, The Big Short is about misdirection. For a long while, its bearing is that of a heist movie. Our heroes, after all, are a bunch of guys who, in predicting early the coming bubble-burst, are looking to stick it to the man and make out with mad profits. Chutzpah, that old can-do spirit, a cheerful middle finger to authority – Americans love this shit. And then there is the turn, when it finally sinks in that our heroes’ big gamble is to bet against the American people. And, boy, did it work. The Big Short’s conclusions are bleaker, more funereal than any I can recall from a popular entertainment – but at least it has the good humor to send us laughing all the way to the grave.

Anchorman 2: The Legend Continues: Super-Sized R-Rated Version
Re-edited to feature all new jokes, a longer running time, and an R rating, this comedy will be in theatres for one week only.