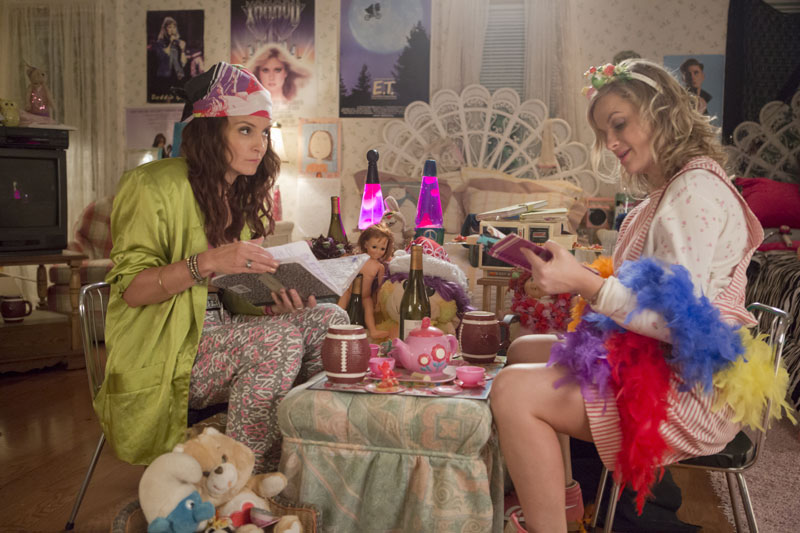 In real life, Tina Fey projects an even keel. Onscreen as Liz Lemon, the funhouse-mirror alter ego she created and played on 30 Rock from 2006 to 2013, she was a crumbs-sticky mess, caught in a cycle of self-defeat. In Sisters, she tries on a new look, playing a total rage case in a push-up bra. Who knew she’d be so good as the bad girl?

That means Amy Poehler is assigned the good-girl role, her little-sis Maura the yin to Fey’s salty yang, unemployed single mom Kate. Peppiness, positivity, sunny-side-up sloganeering –  we’ve seen all that before on another essential NBC sitcom, Poehler’s Parks & Recreation (well, essential to everybody but NBC, it would seem), as the do-gooder Leslie Knope. But within the big comedy beats of Sisters, Poehler squirrels away tiny pockets of sadness, gray clouds crossing over Maura’s face when she’s reminded of her divorce, her lonely life tending to rescue pets.

The two sisters reconnect when their parents (Brolin and Wiest) decide to sell the family home in a baby-boomer rite of passage it would seem, that anti-nesting impulse to “de-clutter.” (Raise your hand if you’ve heard your own parents use the word.) Maura and Kate, appalled at the impending loss of their home and what it represents, aren’t having it. They move back into their childhood bedrooms, untouched monuments to the Eighties, and stage a last stand to sabotage the home’s imminent sale: They’ll throw a rager, just like they did when they were high schoolers. So what if they’re now staring down their mid-40s?

Scripted by longtime Saturday Night Live scribe Paula Pell and cast with such fellow members of the SNL tribe as Maya Rudolph, Rachel Dratch, and next-gen talents Bobby Moynihan and Kate McKinnon, Sisters has a patchily funny first act but unleashes pure comedic chaos once the party gets started. The elements are familiar – heavy boozing, accidental drug ingestion, an inspired spot of bodily injury (inflicted on Ike Barinholtz, a low-key charmer in the mold of Chris O’Dowd’s breakout in Bridesmaids). What enriches these outlandish set-pieces is the specific and existential dread at their core: the feeling of being disconnected from the essential self, the fear that one’s best times are already past. That doesn’t make Sisters a downer. In point of fact, it’s an absolute joy watching these grownups party like there’s no tomorrow. 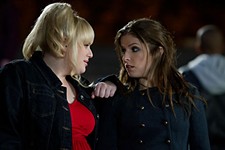 Pitch Perfect
Despite the cookie-cutter dysfunction seen in this college girls' a cappella group, this film film can be a lot of fun.