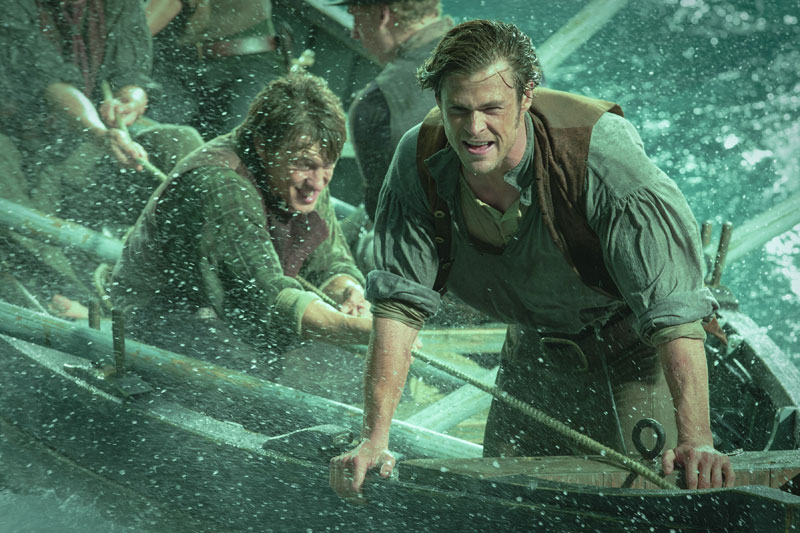 In the Heart of the Sea

The unimaginable chain of catastrophic events that led to the destruction of the Nantucket-based whaling ship Essex in the Pacific Ocean in 1820 is the subject of Ron Howard’s new film. The real-life fate of Essex, her captain, and crew partly inspired Herman Melville to write Moby-Dick; or, the Whale in 1851. Howard, working with screenwriter Charles Leavitt, has adapted author Nathaniel Philbrick’s nonfiction account of the ship’s travails into a gale-force mini-epic of man vs. man vs. nature. That’s a theme Howard has returned to again and again in various capacities and media. Apollo 13, The Alamo, and the superlative HBO series From the Earth to the Moon are all about sturdy men facing long odds, often hobbled by ego and hubris, but still somehow always heroic in their own ways.

In the Heart of the Sea certainly surpasses Warner Bros.’ 1956 take on Melville’s fish tale for which Ray Bradbury served as an unlikely screenwriter (he was later supplanted by no less than Roald Dahl when famously irascible director John Huston proved too editorially combative for Bradbury’s taste). Howard’s film employs a smart framing device for the saga, in which an Essex survivor, former cabin boy Tom Nickerson (played with relish by a hoary Brendan Gleeson) recounts the long-ago maritime terror to a young Mr. Melville (Whishaw), who was at that point a struggling, insecure author and one-time-only whaler crew member. The heart of this particular story isn’t Melville’s leviathan cetacean but the power struggle between the ship’s first mate, Nantucket “landsman” Owen Chase (Hemsworth), and his captain, the highborn but unproven George Pollard (Walker).

Setting sail with an order to return with 3,000 barrels of whale oil, the sharply dressed but wholly inexperienced Captain Pollard almost immediately steers the vessel into a disastrous gale “to test the men.” This puts him at odds with his more sensible first mate and the majority of the crew. As the whales prove scarcer than expected, the Essex sails far into the Pacific, and there runs afoul of that legendary albino “sea monster.” Like Spielberg’s great white, this mammoth mammal has a flair for destruction. In a bravura sequence of chaos and carnage atop the bloody deep, the Essex is destroyed and the surviving crew – Chase and Captain Pollard among them – are cast adrift in their tiny hunting boats, 3,000 nautical miles from land. It is here that their horrors commence in earnest.

Director Howard, his actors, and indeed the entire salty sweep of the film are all aided tremendously by visual-effects supervisor Jody Johnson and his team’s spectacular combination of live action and flawless, awe-inspiring CGI creations, chief among them the great, white whale. Watching its gargantuan fluke pummeling the sea into a mini-tsunami as it dives and breaches is one of the most heart-stopping special effects of 2015.

Friends of Greenpeace and Captain Paul Watson’s Sea Shepherd Conservation Society (of TV’s Whale Wars) should also take note: Howard’s film affirms the great whale’s natural place, power, and obvious intellect; 19th century whaling is portrayed as a ghastly, gore-drenched practice, soon to be undone by overfishing and lack of vision. As that one massive eye silently fixes on Chase as it glides by topside, the future of American whaling is instantly, obviously, and poetically undone.