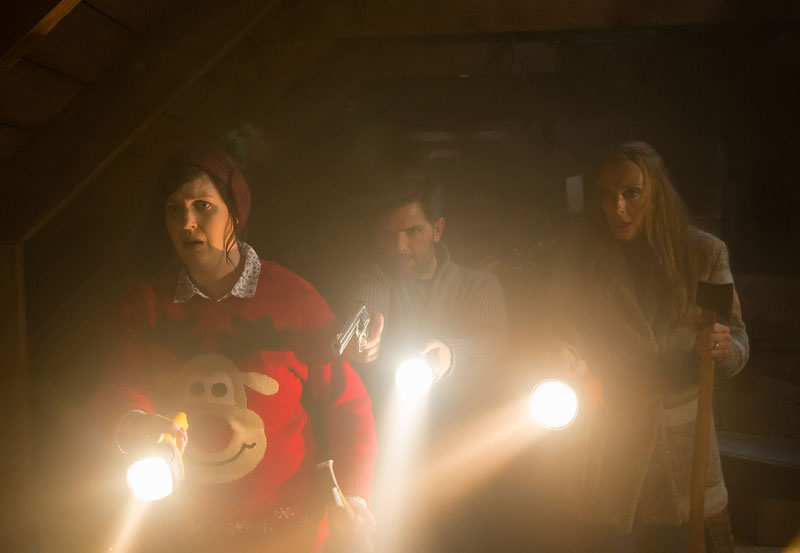 Shot in New Zealand (doubling for Anytown, USA), this seasonal horror-comedy starts off as something of a riff on National Lampoon’s Christmas Vacation, and then heads into Gremlins territory before it finally unleashes the titular Germanic Santa Claws, where things get really nasty. Frankly, we need more seasonal shockers like this. There are only so many times one can re-watch Rare Exports or subject yourself to Michael Keaton as the talking snowman-cum-dad in Jack Frost.

The Krampus of the title refers to the shaggy, horned, and cloven-hoofed anti-St. Nicholas of Austro-Germanic myth that punishes bad little boys and girls by dragging them down into the underworld. (Santa’s traditional lump of coal doesn’t seem so bad now, does it?) Krampus parades, complete with evil elves and the goat-headed demon itself, have resurged both in Europe, America, and of course Austin, in the past 20 years or so, so it’s unsurprising that director and co-writer Michael Dougherty (who helmed the Halloween anthology hit Trick ’r Treat in 2007) would latch on to the mythos and create a new holiday classic for genre fans. Dougherty appears determined to work his way through the underbelly of our most cherished seasonal festivities. Plus, it’s an extremely welcome change of pace from the “found footage” barrage of the past 10 years.

Anthony plays young Max, a true believer in all things Christmas, yet he’s at that age when his youthful convictions are beginning to fall apart in the face of reality. Buoyed by a loving, if distant, mother (Collette) and father (Scott), and teen sis Beth (Owen), he’s closest to his German-speaking grandmother Omi (Stadler). Things head south, albeit comically, when the family’s vulgar, gun-toting, much unloved in-laws (Koechner and Tolman) arrive and everyone becomes housebound by a blizzard. Koechner is fine as the football-crazed dad – a role that would have once upon a time gone to Randy Quaid – as is Tolman as his long-suffering wife Linda, who struggles to keep their own little hellions in line.

After just the right amount of time developing the disparate characters, Dougherty and the team at Peter Jackson’s Weta Workshop kick out the jams with a decidedly unholy host of practical creature effects that are some of the most impressive in years. No (or few) CGI workarounds here: Krampus and his minions, which include murderous gingerbread cookies, killer elves, and a borderline Lovecraftian jack-in-the-box that recalls the toothy critters from 1983’s The Deadly Spawn, are all products of Weta’s famed creature workshop. Dougherty, Weta, and the entire cast put their all into this effectively freaky Yuletide horror show and it’s evident, right down to the pitch-perfect denouement. What was it that Danish metaller King Diamond said? “No presents for Christmas”? Not so this year: Krampus is the gift that keeps on creeping.