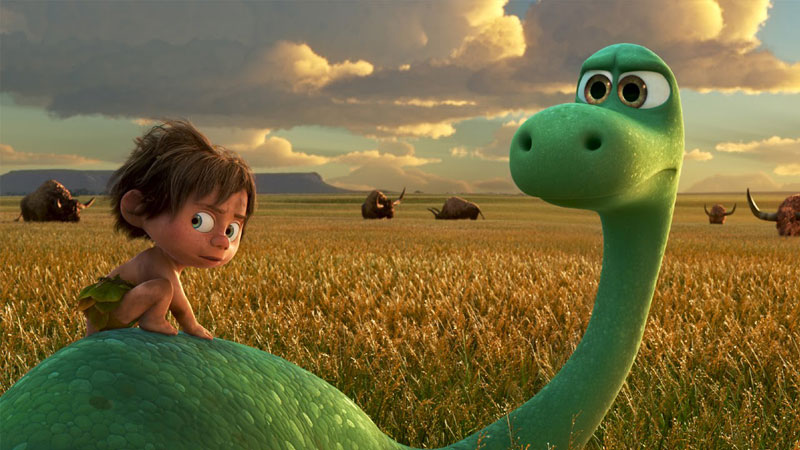 With its latest film, Pixar Animation continues to reign supreme in the realm of family-focused animated features. The Good Dinosaur is sweet and charming, packed with danger, deaths, and emotional tugs. It may not be Pixar’s most original film or most heartwarming, but it gets the job done in fine fashion. And the studio only has itself to blame for deflating expectations by making The Good Dinosaur follow on the heels of their only other 2015 release: the brilliant, groundbreaking Inside Out. Almost anything will pale by comparison.

The movie’s conceit is that dinosaurs were not obliterated 65 million years ago by a presumed asteroid. That space boulder missed Earth entirely (making for an amusing opening fake-out), and the creatures go on to build lives and societies, much along the lines that humans eventually did. Our hero Arlo (voiced by Ochoa, and McGraw as an infant) is an Apatosaurus, who was the runt of his parents’ litter. He’s frail and timid, although Poppa (Wright) tries to teach his son to work through his fears. (Think The Lion King.) One day, Arlo gets lost in a storm and then must spend the rest of the movie finding his way home to his family’s farm. Lessons will be learned, courage will be found, and wisdom gained. As I said before, original this is not.

Yet what is distinctive about The Good Dinosaur is the way in which it unfolds. The dangers Arlo faces seem very real: He’s knocked unconscious at least a couple of times, and endures numerous assaults to his body by unstable terrain, falling rocks, and unfriendly varmints. Most unusual is that Arlo is accompanied on his journey by a human boy who grunts and scrambles about on all fours, whom he names Spot. Wary at first, these two ostensible orphans develop a relationship and mode of understanding. A sequence during which the two figure out a way to communicate the similarity of their situations is poignant beyond measure. Most of all, Arlo and Spot learn about friendship and emotional ties. Plus, it’s no small thing to witness a world in which human beings are not the top dogs in the animal kingdom.

The plot bogs a bit during these adventures, some episodes are more entertaining and meaningful than others. The animation of the animals is fairly basic, but the re-creation of the American Northwest scenery is stunning to behold. Mountains, rivers, rocky expanses, woolly mammoth herds, a field of fireflies – there’s always something sumptuous to look at. Additionally, much creative thought has been devoted to figuring out how the dinosaurs might till the land or solve other problems, using their bodies as tools or weapons. The Good Dinosaur may not be as revolutionary as 1914’s “Gertie the Dinosaur,” but as Jurassic World already demonstrated this year, we never tire of these prehistoric critters. The feature is preceded by a delightful, eight-minute-long animated short, “Sanjay’s Super Team.”