Probably – and one suspects rightfully – the word “legend” will be used five or six decades from now, when Tom Hardy dodders onstage to accept his lifetime achievement award for a screen career portraying criminals and psychopaths. He’s been drawn to both of those types again and again (Bronson, Inception, The Dark Knight Rises, Mad Max: Fury Road) and plays both here, pulling double duty as London’s infamous Kray twins, Reggie and Ronald. Two Tom Hardys for the price of one certainly sounds like a steal of a deal. But if this movie makes it into his future highlight reel, it’ll be for level of difficulty, not because the film itself has made much of a bid for posterity.

Hardy differentiates the two characters with his body and voice work, plus a helpful pair of Sixties-era browline spectacles. Reggie, the brains of the operation, has an easy gait and a confidential lean-in when he’s courting Frances (Browning), a delicate neighborhood girl who catches his eye. Hair-trigger Ronnie – he’s the one in glasses; also: certifiably insane – moves with a thug’s lumber but sounds like he’s caught a permanent case of the sniffles. Together, these three make a combustible love triangle: the gangster turned accidental romantic, the girl who makes him promise he’ll go straight, and the unhinged gorilla he has pledged to protect since they shared a womb.

As the Krays expand their empire, Frances supplies a running commentary via voiceover, spoon-feeding expository details (which turns out to be a boon; between the heavy East End accents and Hardy’s signature growly mumble, the lack of enunciation renders whole chunks of dialogue unknowable), as well as filling in any blanks that writer/director Brian Helgeland (who won the Oscar for his script for L.A. Confidential) chooses not to dramatize. For much of the film, it’s a niggling question – why precisely is Helgeland favoring her perspective? Eventually, we get an answer. It packs a punch, but it lends the film more gravitas then it’s probably earned.

The look is spot-on – these cat-eyelined ladies with their bouffants, hunched gangsters in smoky barrooms – yet Carter Burwell’s uncharacteristically plodding score is oddly out of time. For the film itself, the measuring of time – how it unfolds onscreen, and what takes place offscreen – is a problem. When Helgeland holds his concentration, he delivers a nifty, unbroken slink through a nightclub that spotlights every side of Reggie’s warring personalities – the cool-headed club owner, the curling-fisted crime boss, and the sweet guy falling stupid in love. But that scene – smooth as butter, the film’s best – is the exception. Mostly Legend just lurches. 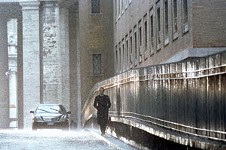 The Order
Mysterious doings in a Catholic sect, on the whole more silly than scary.