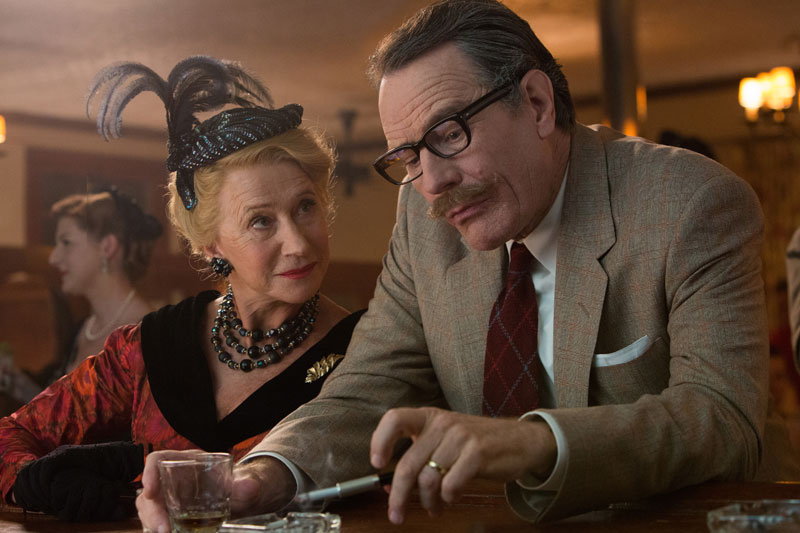 Nobody ever confused the 1997 Bond spoof Austin Powers: International Man of Mystery with a historically accurate portrayal of the swinging Sixties. And yet, in his first feature film – that groovy-baby, tsunamic success – director Jay Roach did catch some of the flavor, the randy fever, of the times: Call it history-adjacent. Disappointingly, the same modifier must apply to the more sober-minded Trumbo, Roach’s too-twee and terribly theatrical rendering of the battle that blacklisted screenwriter Dalton Trumbo (Cranston) fought and – if you take the long view – finally won.

A celebrated screenwriter (Kitty Foyle, Thirty Seconds Over Tokyo) and novelist (Johnny Got His Gun) when the Red Scare machine revved up, Trumbo was one of the more prominent Hollywood players to be called to appear before the House Un-American Activities Committee in 1947 to discuss his perfectly legal involvement in the Communist Party. Trumbo declined to cooperate, along with other subpoenaed writers and directors; that first wave of unfriendly witnesses became immortalized as the Hollywood Ten, blacklisted from future work in Hollywood. Trumbo, like so many others, was forced to write under pseudonyms (rightfully owed the Oscar for Roman Holiday, Trumbo was posthumously recognized), and he had a steady gig with the low-rent King brothers (Goodman and Root), dirty-worded bright spots in a film that hoards the best quips for Cranston.

Trumbo dutifully clops through what came before and after the HUAC hearings (though curiously skipping over the writer’s self-imposed exile in Mexico with his family) and name-checks famous people with the wink-eye of a celebrity mag. Helen Mirren, as the toady gossip columnist Hedda Hopper, benefits from playing someone no longer emblazoned in filmgoers’ brain banks, while the exceptional character actor Michael Stuhlbarg, miscast, paws the ground fruitlessly trying to make inroads on the more iconic Edward G. Robinson. Trumbo surely does a public service by reminding folks John Wayne was kind of a jerk, and Ronald Reagan a friendly witness (yep, the jelly bean king was a rat), but that good deed is undone by the film’s ironic decision to composite several Hollywood Ten writers into a single made-up guy (played by Louis C.K. – not his fault). In a movie explicitly about men stripped of their names, it seems exceptionally bad form to do the same in service of narrative expediency.

Trumbo certainly has pep. Theodore Shapiro’s jazzy score doesn’t just boast a tom-tom – you could choreograph it with pom-poms. Maybe Roach worried that general audiences wouldn’t cotton to a yellowing story about the Red Menace, so he ginned it up with a jazz-hands idea of midcentury Hollywood, with everyone mugging like it’s a lobby-card photo shoot. Roach does get good mileage from the sight gag of Trumbo tapping out screenplays in his bathtub, stiff drink and cigarette at the ready – a true-to-life writing tic made bronze monument in Trumbo’s hometown of Grand Junction, Colo. I wonder if it has more dimension than this celluloid monument? 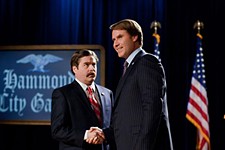 The Campaign
A wan political comedy guaranteed to offend no one.