Spotlight is a great newspaper movie, ranking up there with All the President’s Men and Citizen Kane, and it’s certainly the best of its kind since The Paper in 1994, which also happened to star Michael Keaton. Admittedly, the subject matter is a sentimental favorite for me, and I thrill to see the daily details of the work and milieu depicted with such knowing accuracy.

The movie retraces the probe conducted in late 2001 and early 2002 by the “Spotlight” investigative team of The Boston Globe into allegations of the sexual abuse of minors by Catholic priests, as well as the church’s systemic cover-up of the misconduct. The team’s series of reports, which uncovered more than 1,000 victims and 70 pedophile priests, was recognized with a Pulitzer Prize. Given the church’s deep entrenchment into the secular lives of Boston’s citizens, as well as those of the Spotlight reporters, digging into these matters came with no small amount of public resistance and personal struggle for the journalists. Keaton plays Walter Robinson, the editor of the Spotlight team, but he is only part of the movie’s ensemble, which is yet another way the film reflects the many essential players in a newsroom. Mike Rezendes (Ruffalo) and Sacha Pfeiffer (McAdams) are the team’s reporters, Matt Carroll (d’Arcy James) its data researcher, Ben Bradlee Jr. (Slattery) the section editor, and Marty Baron (Schreiber) the Globe’s newly appointed editor-in-chief, about whom it’s whispered that he’s “an unmarried man of the Jewish faith who hates baseball.” Despite (or because of) his outsider status, it is he who gets the investigative ball rolling, and also rejects printing the earliest revelations in favor of unpacking the whole story of the systemic rot rather than individual abuses. “If it takes a village to raise a child, it takes a village to abuse one,” he declares as the investigation’s guiding principle.

Tom McCarthy, who is also an actor (perhaps not incidentally, he played a reporter on The Wire) has become something of an actor’s director (The Station Agent, The Visitor), and that sensitivity to the ensemble comes through here. His visual style in Spotlight is undistinguished, but gets the job done: You can practically smell the musty piles of papers stacked on the clutter of desks and the worn shoe leather that got more of a workout in the days prior to the ubiquity of desktop computer searches. But most of all, he reins in this subgenre’s tendency to paint its newspaper people as heroic crusaders with beautiful faces. Spotlight is a story about people doing their jobs, and combating scandalous misdeeds with dogged determination. 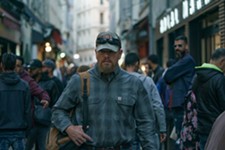 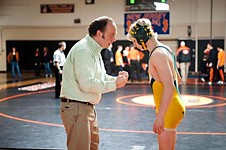 Win Win
Paul Giamatti stars in this dark comedy from the director of The Station Agent and The Visitor.