Texas football fans sure could use a spot of good news this season, although it’s tough to say if this loving portrait of late-Sixties Longhorn safety Freddie Steinmark will bring succor or just rub salt in their wounds. At the very least, current coach Charlie Strong should take comfort in the film’s case that even beloved coach Darrell Royal got hassled by Horns boosters for anything less than perfection.

Though Aaron Eckhart gets top billing and poster placement as Coach Royal, as well as providing the film’s framing device (in surely the first cinematic instance of a Daily Texan reporter being used for info-dump purposes), this is Freddie Steinmark’s story, beginning with his early development as a gifted but undersized young athlete. Dad (Burke) runs speed trials with him, while mom (Tunney) slaps second helpings on his plate to fatten him up; getting Freddie drafted into Notre Dame is a family project. The Fighting Irish never call. Instead, high schooler Freddie – still gifted, still undersized – gets tapped to join Coach Royal’s team in Austin, alongside his best friend and teammate, Bobby Mitchell (Terrell).

Once ensconced at UT, Freddie makes his mark fast, becoming only the second starting safety in Royal’s history and, eventually, a key contributor to the now-legendary 1969 season that included the so-called “Game of the Century” against the Arkansas Razorbacks and concluded in a National Championship for the Horns. (James Street was the QB; touchingly, his son Juston plays him in the movie.) Throughout the season, Freddie is plagued with leg pain. I won’t reveal his diagnosis to Longhorn history neophytes, but I do wonder if the filmmakers intended to so strongly imply complicity; everyone, from his girlfriend to his best friend to his coaches, all acknowledge that he is badly hurt, and no one makes him go to the doctor.

Writer and first-time director Angelo Pizzo already has to his credit an all-time great sports movie, 1986’s enduring Hoosiers. (He also wrote 1993’s Rudy, about another slight-sized football player with Notre Dame ambitions.) As a visual stylist, Pizzo’s work is competent but never inspired. (A final aerial zoom, while thematically on point, is clumsy.) Pizzo intuitively understands the beats that make for a great underdog narrative, though this particular story – which too often moves like a highlight reel, not a rounded drama – is stuck with no bad guy for the underdog to bounce off of. In any case, you get the feeling Freddie never met a man he didn’t like – at one point, Royal caps a conversation with Freddie by saying, “You just make me feel better about things” – and Pizzo and his star Finn Wittrock do lovely work dramatizing Freddie’s fundamental decency, an underappreciated skill in film. The charismatic Wittrock plays the character as sunny without being saintly, determined, devoted; every good thing that comes to him, he earned, and every bad thing, he didn’t deserve.

My All American isn’t going to make the sports movie pantheon, but it should be well-received in Longhorn country. My father – a UT student in the late Sixties – called me twice this week with stories about Steinmark, and during the sneak screening, I overhead another father whisper to his sons, “That’s my hero!” when defensive back Super Bill Bradley came onscreen. Football movies may be the bedrock male weepie, but I cried, too.

See “When They Were Kings,” Nov. 13, for an interview with the filmmaker.

READ MORE
More My All American 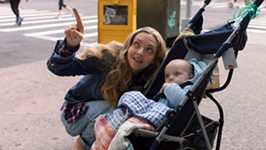 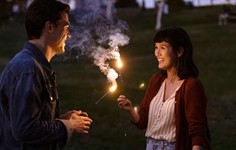