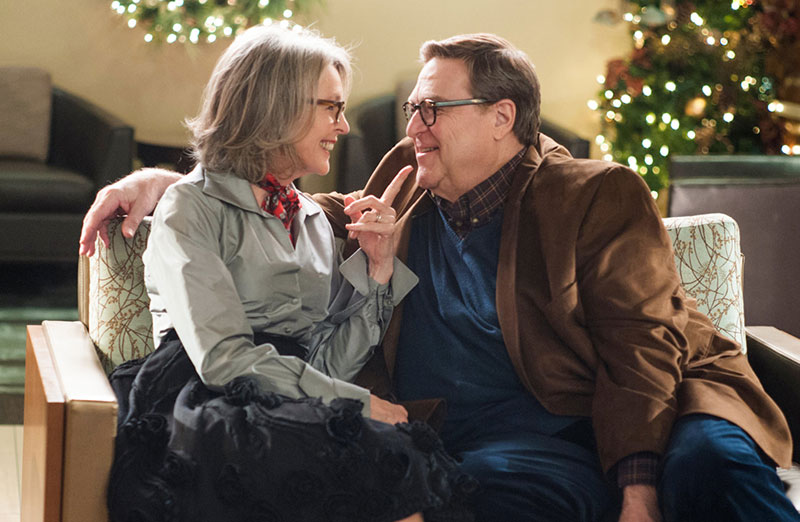 Love the Coopers: a valediction hastily scribbled at the bottom of a Christmas card, or an entreaty to embrace yet another white upper middle-class heterosexual Protestant family in a holiday-themed movie? Either way, it’s a tangled strand of related (by blood) storylines that converge like forgotten Christmas lights stored in a cardboard box and squirreled away in a dusty attic. It’s a frustrating thing to unsnarl. Straddling the thorny fence of dramedy, Love the Coopers is a sometimes too serious, often not funny entry in this year’s tra-la-la movie sweepstakes. All of its familial dysfunctions are on awkward display. They include the teetering marriage of the Cooper clan’s backbone couple (Goodman and Keaton); an unlikely relationship borne in an airport terminal between a daughter who has a history of bad choices (Wilde) and a grounded soldier on leave (Lacy, finally getting his due); an impromptu psychotherapy session between a spinster aunt arrested for copping a broach (Tomei, terribly wasted) and a closeted cop (Mackie), which takes place in a police car; and the weirdly platonic coupling of the cinema-loving paterfamilias (Arkin, also wasted) and a much, much, much younger waitress with scarred wrists (Seyfried, given little to go on). Even the guilty pleasures of the perennial Love Actually – possibly the most polarizing holiday movie of all time – will be more tolerable (count me in!) for its detractors compared to this film’s attempts to elicit Christmas cheer. Ho, ho, ho. And ho.

The movie lacks a consistent perspective: Should you laugh, cry, sigh, shrug your shoulders? Or feel something altogether different? Sometimes, a film can subtly defy categorization, but not here. Love the Coopers wants to have it any way possible, without achieving a particular point of view with which the audience can relate. Sure, family get-togethers every December may be the times that try men’s and women’s souls, but not in the fabricated manner depicted here. (For a movie that more accurately hits the mark, check out the 1995 release, Home for the Holidays.) When a reunited Keaton and Goodman proceed to make out in front of other stunned family members near the end, you’re not sure whether to shout in approval or cringe in abject horror. This narrative development makes no sense, regardless. That said, the shaggy-dog revelation of the omniscient narrator’s identity, who comments on the characters’ backgrounds and motives throughout, momentarily lifts the movie from the doldrums of mediocrity. It is, however, a brief respite. As it turns out, the Coopers ain’t so lovable, no matter what time of year it may be. 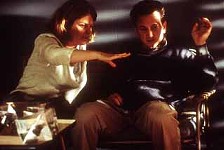 I Am Sam
Viewing I Am Sam is an experience of successive facial expressions: First there are embarrassed winces, followed by uncomfortable cringes, and ending with an open ...