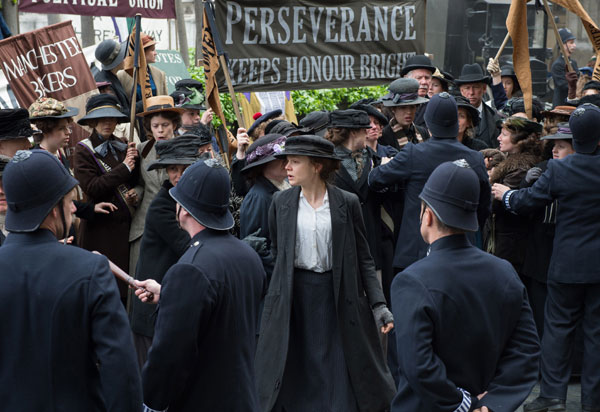 With little more novelty than a chapter in a standard-issue history book, Suffragette soldiers through its story about the fight waged by British women during the early decades of the 20th century to win the right to vote. It’s an interesting and, yes, important story to tell, especially in this moment of demand for more movies to be made about women and by women. Yet I fear the groundswell may be tamped in the wake of too many paint-by-numbers pictures like Suffragette and the recent Freeheld, which despite their female protagonists are narratively wan and disappointing.

As the film’s central character Maud Watts, Carey Mulligan delivers an engaging performance, her face providing an elegant canvas for conveying Maud’s joys, fears, and bewilderment. Maud is a fictional character, a working-class woman who is also a wife and mother, whom we meet in 1912 just as Emmeline Pankhurst (Streep, in a brief cameo) is encouraging the women’s suffrage movement to engage in acts of civil disobedience to further the cause since polite campaigning had clearly proved ineffective. Maud has been employed in the same laundry since she was a child, and has been a model worker who’s moved up the ranks to forewoman while also enduring sexual abuse from the boss. But she gradually becomes radicalized through her friendship with Violet Miller (Duff), another laundress who encourages Maud to come to suffrage meetings. Maud’s presence at a gathering causes her to be thrown into jail for a week, and then be evicted from her home by her mortified husband (Whishaw) and forbidden to see her young son. Eventually, this amalgamated character becomes a friend and co-conspirator of the real-life Emily Wilding Davison, and is with her at the moment Davison famously martyrs herself for the cause.

Brick Lane
Brick Lane shows us the life of a Bangladeshi woman, who moves to London to marry a man she's never met, keep house, raise a family, and eventually act on her squelched yearnings.