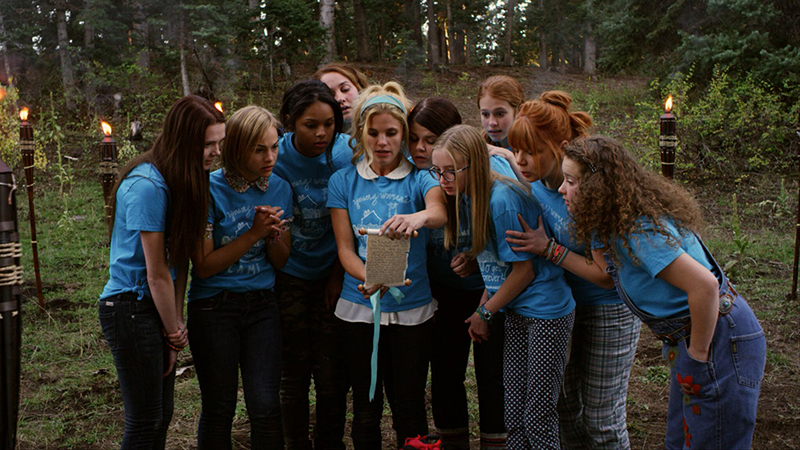 Once I Was a Beehive

Contemporary faith-based cinema often veers toward ham-handed treatises in which the main character is beset on all sides by philistines who test his or her faith (see: God’s Not Dead or any post-Growing Pains Kirk Cameron project). That is, thankfully, not the case with the Mormon-tinged Once I Was a Beehive, a sweet summer-camp film and coming-of-age story that is less interested in propagating ideology than it is in just telling a heartfelt narrative of a girl coming to terms with her grief.

Lane (Warner) has been going on monthly camping trips with her parents for as long as she can remember. Now a teenager, the call of the wild holds less of an interest than boys and social media. But her dad, Robert (Johnson, here a poor man’s Jeff Bridges) imbues these trips with impish glee and dad jokes galore, but those bucolic trips end when he is diagnosed with and eventually succumbs to cancer. Flash-forward to a year later, when Lane’s mom Audrey (Biedel) is set to wed Tristan (Merritt), a Mormon, and Lane, who is still grieving for her father, is left in the hands of new in-laws while the newlyweds head off on a honeymoon cruise. Enter Phoebe (Mila Smith), Lane’s new step-cousin and confidant, a mousy girl with an inordinate amount of anxiety who has a service dog, Roxie, to keep the phobias at bay. A weeklong summer camp awaits them both, as Phoebe’s mom Holly (Hailey Smith) and perpetually chipper organizer Carrie (Clark) lead the two, and a handful of other teens, to the forest for a meticulous regime of outdoor activity and inward soul-searching. Lessons are learned, obstacles are overcome, and an incessantly jangly guitar soundtrack plays endlessly over the whole sun-dappled affair.

But for the most part, it works. Some of the ensemble cast gets the short straw as characterization goes, and there are a heck of a lot of contrived scenarios implicit in such films, but Once I was a Beehive couldn’t care less. It is an unabashedly good-natured film that doesn’t ram its religious ideology down your throat. At two hours, the film wears out its welcome a bit, but Nelson and co. deliver a refreshing and often silly tonic to the proselytizing films that define the genre. The messages delivered here are more about being a proper human than anything else, and that’s a reminder we could all use.