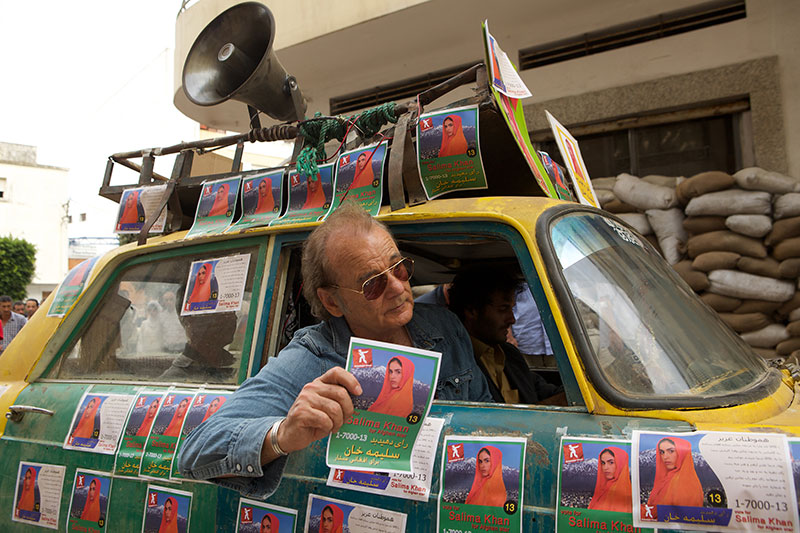 What with his tendency to pop up in the most unexpected place these past few years – weddings, behind the bar at SXSW, the rear corner window of every other car in front of you – you’d expect his work in Rock the Kasbah to be another in a long line of unforgettable performances. Unfortunately, it’s the obverse: It’s another in a long line of forgettable – or at least strikingly obvious – Bill Murray roles. Now that he’s entered some sort of iconic, pop-cultural rubric and become part and parcel of the great American zeitgeist (and yeah, he’s always been there, but he’s never been quite this ubiquitous), we forget that there’s always been the normal amount of either mediocre or outright paycheck performances dotting his CV. I feel bad to have to remind people of that. This is Bill Fucking Murray, after all, tied neck-and-neck with Steve Martin as the best living Hollywood comedian able to do serious drama with droll comic overtones, and more. But Rock the Kasbah is classic Murray being Murray, by which I mean it’s nothing we haven’t seen before.

A major part of the problem with Rock the Kasbah lies with the script by Mitch Glazer (Scrooged and Netflix’s forthcoming A Very Murray Christmas). Very loosely based on the story of the first young woman in Afghanistan to sing publicly on Afghan Star, that country’s televised version of American Idol, Glazer’s story and dialogue feel overly scripted coming out of Murray’s, and everyone else’s, mouth. The ending is never in doubt, and whole chunks of the film feel padded and unnecessary.

Murray plays Richie Lanz, a washed-up music manager/agent who’s called back from the brink when his girlfriend (or “talent,” it’s never really made clear) gets a USO gig playing for the troops in Kabul. That quickly falls apart, but Richie, by sheer happenstance, discovers an Afghan girl, Salima (a furtive Lubany), singing Cat Stevens songs alone, in a cave. Inexplicably moved, he formulates a scheme to shatter Muslim taboos and expose her talent to the world, preferably while getting his 20% on the side.

Bruce Willis shows up, in full Bruce “yippee-ki-yay, mofo” Willis mode, to little effect, and while Hudson’s sassy camp follower is a hoot, there are just too many narratively bizarre subplots falling out all over the place. At best, Rock the Kasbah is pale shadow of Murray’s (and director Levinson’s) earlier, more nuanced work. Murray completists – I count myself among them – will flock to it, but will probably come away disappointed at how not-weird this oddball film actually is. 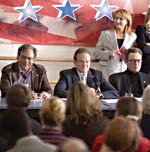 Man of the Year
Instead of being the hippest kid on the block, this comedy plays like a schizophrenic exercise in shrill cinematic politics.