The creepy tales of kid-lit scaremeister R.L. Stine literally leap off the page in Goosebumps, a monster mish-mash too lazy and cynical to actually terrify anyone. There’s not much “boo!” in the bugaboos here. Based on the absurdly popular anthology of horror fiction that sold over 400 million books during its heyday, the film’s conceit is admittedly an interesting one: A trio of teens unwittingly unleashes on their sleepy little town the literary mayhem in the locked manuscripts of Stine’s works, much to the authorial dismay of the man who created those waking nightmares (a bespectacled and weirdly accented Black, looking and sounding nothing like Stine). The monsters that are due on Maple Street include a mutant praying mantis, a horde of ravenous zombies, a teenage werewolf, an army of garden gnomes wielding pickaxes, and a vengeful ventriloquist’s dummy named Slappy, who gleefully masterminds the bedlam in retaliation for his past imprisonment on the written page. The chaos escalates as the creatures proliferate, resulting in a CGI-laden orgy of bogeymen battling one another for screen time as Stine and his accomplices attempt to contain the pandemonium by crafting a new story to entrap the figments of his imagination. It’s sensory overload for the Ritalin generation, one that uses special effects of dubious quality to placate its youngish audience members like a giant pacifier, mindlessly suckling them with numbing effect. Let’s be honest: Kids deserve better than this.

Most of the humor falls flat, with genuine wit in short order. This is the stuff of the Nickelodeon school of comedy. (The one notable exception: when doofus sidekick Champ reveals a silver-encased molar after chomping down on the werewolf’s neck and sending the lycanthrope howling into the night.) Even the usually resourceful Black seems at a loss; he’s reduced to running amok with the rest of the cast, fleeing one green-screen baddie after another. The film makes passing nods to horror classics like Gremlins and The Shining, but those homages are half-baked. While these shortcomings could be forgivable, the film’s utter lack of scariness defies pardon, particularly when you take into account Stine’s gift for raising hairs on end. There’s so much commotion in this filmed pastiche of his stories that none of the movie’s fanciful fiends is remotely threatening or frightening. At best, Goosebumps is a who’s who in the Stine literary oeuvre, featuring characters who were terrifying on paper but rendered toothless here. What once kept the young’uns up at night will now have them yawning way before bedtime. 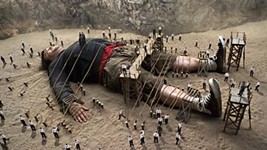 Gulliver's Travels
In this update of the satiric Jonathan Swift novel, Jack Black plays s travel writer who becomes lost on the island of Lilliput.