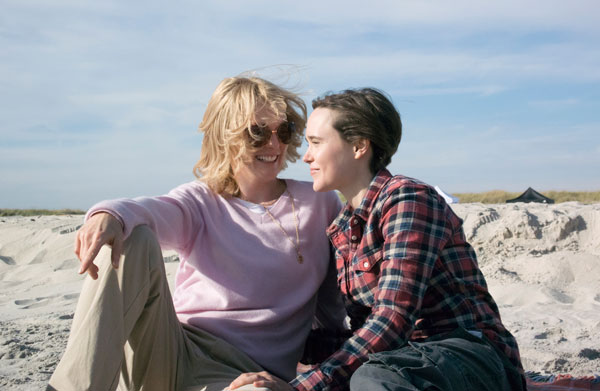 Disappointing in the extreme, Freeheld is a well-meaning movie that never ignites. Riddled with cliches and dull direction, the film also seems miscast and, through no fault of its own, a couple of beats behind the times.

Based on actual events that took place in the early Aughts, as well as a 2007 documentary short by Cynthia Wade, also called “Freeheld,” the film recounts the struggle waged by Laurel Hester (Moore) to leave her pension to her registered domestic partner Stacie Andree (Page), after receiving a diagnosis of Stage IV cancer. A 23-year decorated veteran of the Ocean County, N.J., police department, Hester wanted to make sure that Andree, an auto mechanic, would be able to keep the home they shared after her death. For Hester, it’s not a feminist or gay-rights cause, just a matter of equal treatment for gay and straight pension-holders. But in the decade before gay marriage became the universal law of the land, the issue was contentious. The county freeholders voted against granting the pension to Andree, even though they were within their rights to do so in the state of New Jersey. With her cancer spreading and death ever more imminent, the fight continued – and was aided and usurped to a certain extent by Steven Goldstein (Carell), an advocate for gay marriage with connections to the governor, whose purple yarmulke and flamboyant queerness put him at the forefront of any battle he chose to wage. He saw Hester’s case as one of the stepping stones to his ultimate goal of legalized gay marriage.

Freeheld’s screenwriter Ron Nyswaner also penned the Oscar-nominated screenplay for Philadelphia, a movie that Freeheld resembles more than a little bit. Yet that earlier movie about the job-discrimination case waged by an attorney with AIDS managed to eke out more humanity and emotional depth in a few scenes than in the entire running time of Freeheld. Certainly, that’s due in large measure to the Oscar-winning performance of Tom Hanks and the sensitive direction by Jonathan Demme. Julianne Moore and Ellen Page are no acting slouches either, but they definitely seem miscast in Freeheld. There is no perceptible romantic chemistry between the two, and Moore, with her Farrah Fawcett hairdo and sketchy accent, delivers some of her most unconvincing work ever. Michael Shannon as Laurel’s work partner is underused, just as Steve Carell is overused for comic relief. Yet most of Moore and Page’s failure to click must be laid at the feet of director Peter Sollett (Raising Victor Vargas, Nick and Norah’s Infinite Playlist). The women hardly have time to meet and move in together before Hester’s diagnosis turns them into perpetual mourners hugging each other on the beach while staring into the endless horizon. There’s no life or reality to these characters. And there’s no accounting for the vagaries of history. Freeheld is a product of an era in which nobody could foresee 2015’s complete overthrow of the United States’ gay marriage ban, and the film is structured as a look at a historical stepping stone. But the parade has now moved on and Freeheld seems more like a footnote than a groundswell.