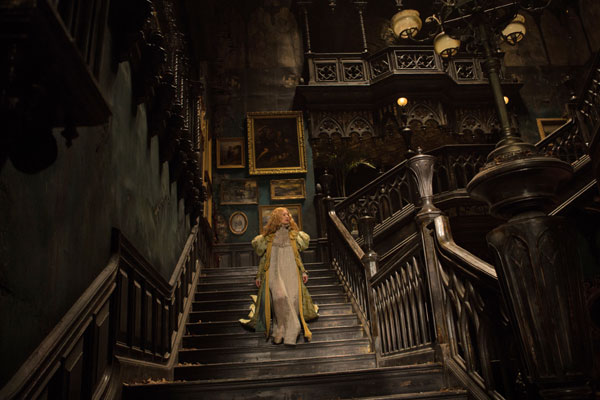 Guillermo del Toro’s first real foray into the realm of Gothic horror-romance, leavened with a hint of Italian giallo, is a departure of sorts for the Mexican fantasist (and onetime Austinite) whose mainstream cred stems mostly from his Hellboy movies and his popular FX network show The Strain. Genre fans, however, know all too well that del Toro has always had a ravenous eye for outré beauty and a highly stylized visual grandeur that flows throughout his unique body of work, and Crimson Peak sets a new high-water mark for the director in terms of ravishing production, art, and wardrobe design. For sheer, sepulchral eye candy at this most horror-ific time of year, del Toro’s Crimson Peak leaves Tim Burton – reigning misfit king of hyper-stylized, goth-y weirdness – in the dust and well-nigh forgotten.

All the colors of the dark, though, can’t make up for what feels like an oddly cobbled-together movie that plays out in fits and snatches and never fully kicks into high ghostly gear. Wasikowska is Edith Cushing, widowed heiress in Buffalo, N.Y., with literary aspirations in the Mary Shelley vein. Early on, she meets and is smitten with one of her industrialist father’s potential clients, the English baronet Thomas Sharpe (Hiddleston), who’s arrived in Buffalo seeking funding for a engineering project in his native Cumberland. He and his sister Lucille (Chastain, cool as black ice) end up returning to their crumbling ancestral manse with Edith and her money (they hope) in tow. Nicknamed Crimson Peak for the viscous, Crayola-red clay that bubbles up from the ground and literally turns the grim, wintry landscape into a colorfully coagulated hellscape, Allerdale Hall holds a cackling clawful of ghastly secrets. Supernatural melodramatics, and Wasikowska’s seemingly endless blond coif, prevail.

Crimson Peak is besotted with the far-lower-budgeted but no less effective visual tropes of Roger Corman’s mid-Sixties Poe pics, Italian horror auteur Mario Bava’s kaleidoscopic nightmare eye, and the garish Victoriana of Hammer Studios at their own crimson peak. And yet it’s still very much a recognizably Guillermo del Toro production, filled as it is with his fetishistic body bag of entomological oddities (in this case, hundreds of wide-winged black moths), whirring and clanking clockwork mechanisms, and shockingly sudden outbursts of decidedly unromantic, realistically visceral violence. All of these elements are on vivid display, in abundance, along with some of the most startling and sumptuous imagery of his career, courtesy of director of photography Dan Laustsen (Brotherhood of the Wolf).

But this tale of innocence lost, replete though it may be with snowy-white symbolism and oozing, profondo rosso phantasms, feels more like an ambitious stab – no pun intended – at something the director has yet to completely master. There’s a defiantly R-rated sex scene, unusual for del Toro, and while all three leads are well-cast (particularly Hiddleston, replacing Benedict Cumberbatch, who bowed out early on), Crimson Peak’s disjointed, laggy storyline renders it second-tier del Toro. Which is, of course, first-tier anyone else. 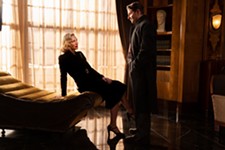