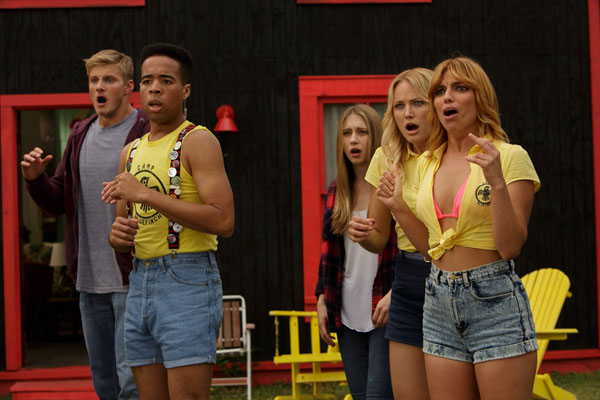 Meta is betta in the sneaky The Final Girls, a surprisingly touching movie-within-a-movie homage to the cheesy campsite horror film of the Eighties. You know the formula: A slew of horny teenagers in a wooded setting is menaced by a machete-wielding madman who inventively slays them one by one until the final girl (the sole virgin, of course) ends the rampage. Aside from its rote cheap thrills, the genre’s sex-equals-death equation unconsciously spoke to a generation coming of age in the early years of the AIDS epidemic, extolling the virtue of keeping your pants on to keep your head attached. The Final Girls toys with this 10-little-Indians formula by magically looping a quintet of present-day young adults into a fictional 1986 slasher film titled Camp Bloodbath, which (surprise!) features a quintet of horny Reagan-era camp counselors terrorized by a bloodthirsty maniac. Trapped in the Friday the 13th-ish film for its duration, the new kids use their knowledge of the genre’s conventions to change the course of the narrative and survive by the time the credits roll, much to the bewilderment of the old kids stuck with the script. For one of the interlopers, Max (Farmiga), the unreal experience is frighteningly real (or not?), given the actress playing one of the scream queens in the slasher film is her late mother (Akerman). What’s a final girl to do?

The alternate cinematic universe depicted in The Final Girls doesn’t always hang together perfectly, but there are just enough smarts here to overlook any lapses in the postmodern logic in M.A. Fortin and Joshua John Miller’s clever, self-referential screenplay. This is Scream at a lower decibel. What’s most striking about this little movie is the way the mother-daughter relationship at its core resonates, complicating the otherwise straightforward slaughter of adolescents in the modified horror flick. Their roles reverse, as the real-life offspring counsels the parent (or more accurately, a fictional character played by the parent) about sex and other scary things in the grownup world. Both Farmiga and Akerman emotionally connect in the film, which culminates in an ultimate act of maternal sacrifice more moving than you might imagine. Finally! A slasher movie with both brains and heart, both intact. 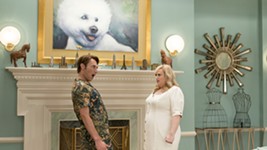 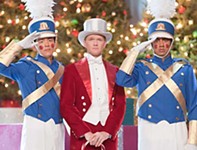