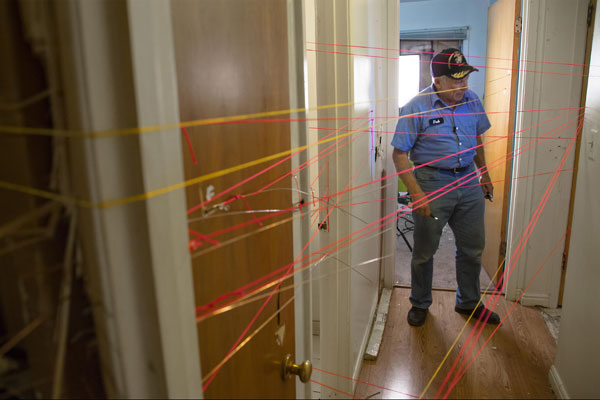 A documentary about the awful, ever-widening divide between intended peace officers and a populace that has grown wary of police – if not downright terrorized by the very thought of them – could not be more timely. That Peace Officer cannot provide a complete picture of the myriad of problems that come with the increased militarization of police isn’t an indictment of the film. This trouble is too big for one film to contain.

The makers of Peace Officer, Scott Christopherson (who teaches at St. Edward’s) and Brad Barber, are wise to winnow their focus to a series of tragic SWAT (Special Weapons and Tactics) operations in Utah, and they’re blessed, in a sense, to have found in William “Dub” Lawrence a deeply charismatic central figure. As a young sheriff in Davis County, Utah, Lawrence established and trained the first SWAT team in the state. Thirty years later, the same SWAT team he founded shot and killed his son-in-law, Brian Wood, who had barricaded himself in his truck with a gun pointed mostly at himself. News and police surveillance footage at the time show a chaotic, confusing standoff between an unhinged, distraught man with a weapon and a massive police presence. In Lawrence’s opinion, the SWAT team catastrophically escalated a tense situation and made a series of bad calls. Unhappy with the police account of the shooting, the retired former sheriff personally combs the crime scene and painstakingly examines the chain of events to get to the truth of his son-in-law’s death (which police initially claimed was a suicide). As other violent officer-related shootings occur around Davis County, Lawrence looks into those, too.

Lawrence’s forensic examination of entry wounds and bullet casings is essential to his investigation, but it doesn’t always translate on-camera; we watch him at work without necessarily grasping how he gets to his conclusion, and at least one, seemingly damning determination of his – that an officer in a deadly drug raid was wounded by friendly fire, not by the weapon of the pot grower whose home had just been invaded – is introduced, but not responded to by law enforcement or the district attorney. (Did they refuse to comment? Was Lawrence’s conclusion wrong? It’s unclear.) But the film, which won both Audience and Jury awards at SXSW 2015, doesn’t get bogged down in the wonkish stuff. Its most lasting impression is a haunted, human one: of Lawrence in the long hallways of the airplane hangar he converted, walls plastered with his obsessive work, this one-man CSI unit on a mission to expose the cracks in a foundation he himself laid. He’s an extraordinary subject.

See “Excessive Force,” Oct. 9, for an interview with the directors.