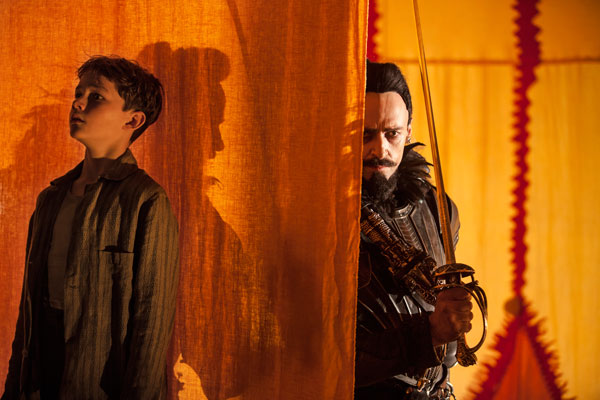 Ill-conceived from any number of angles, this Peter Pan origin story, scripted by Jason Fuchs (Ice Age: Continental Drift), plays topsy-turvy with J.M. Barrie’s beloved characters by showing us how an orphaned Peter (Miller) first arrives in Neverland, befriends a pre-captaining Hook (Hedlund, wandering in from a Saturday-matinee Western), and battles the despotic pirate Blackbeard (Jackman), who’s seeking eternal life through the dwindling resource of fairy pixie dust. Trotting out old favorites without tracing any of the original’s magic, the film roll-calls Tinker Bell, Smee, a premonitory tick-tock, and Tiger Lily, who’s played by the bizarrely miscast Rooney Mara; even Disney, historically not exactly a progressive company, had the decency not to draw the Indian princess as white. Just as tin-eared is the film’s decision to signify the deaths of her tribal warriors in poofs of brightly colored powder.

It’s not that there isn’t imagination at work here. In infrequent bursts, director Joe Wright (continuing his losing streak following 2012’s misbegotten Anna Karenina) cooks up some nifty inventions, all airborne, like the squalling Neverbird, a delirious trip to outer space, and hand-to-hand combat that takes place entirely on a trampoline. (The 3-D format also benefits some stomach-dropping aerial shots.) But kids aren’t going to have much patience with the film’s drawn-out mystery of Peter’s parentage or the G-rated googly eyes Hook and Tiger Lily trade, while adults will bemoan the overlong, dullish action set-pieces and unforgivable midfilm disappearance of Jackman’s Blackbeard, who at least is having some fun playing athletically evil – in conquistador getup, no less. Jackman – at 46, playing eternally youthful is still no stretch – gets his best moment early on, when he jumps three feet into standing splits on a rail. This guy’s a rock star, all right, which might be why Wright thought it was a good idea for Blackbeard to nonsensically lead his hundreds of enslaved pixie-dust miners in a cover of Nirvana’s “Smells Like Teen Spirit.” Together they chant “Here we are now/ entertain us!” – a not unreasonable audience demand, come to think of it – but in that respect, the film takes a long walk off a short plank. Bad form, Pan. 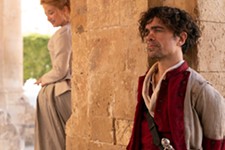