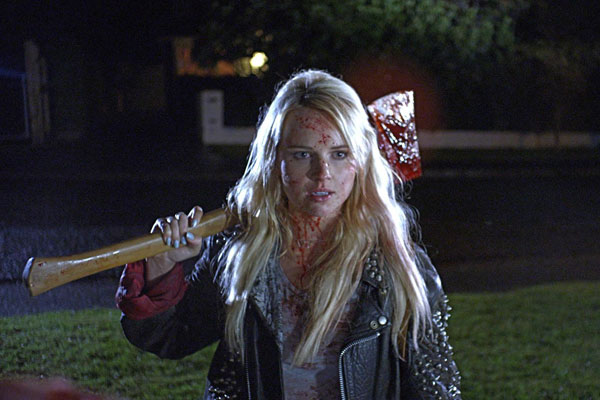 Cawthorne is Brodie, the new heavy metal misfit in a small New Zealand town. Sent to live with his white-bread relations following a family fracas (deftly explained early on), Brodie’s a beat-down magnet, with his chief nemesis being his own cousin. While digging through the metal section at the local record store – Deathgasm has a very Eighties vibe to it – he makes friends with elder metal statesman Zakk (Blake), recruits two school chums (Berkley and Cresswell, both goofily wonderful in their roles), and together they form the titular band. Through a gnarly but compacted bit of business involving a satanic hymnal and a reclusive metal legend, they end up invoking a hellacious demon that threatens not only the world but tests their friendships and loyalties as well. Chaos, you know, reigns.

Howden scripted as well, and while Deathgasm is exactly what you’d expect from the title, it’s also considerably more than just shrieking demons and endless rivers of gore. Peppered with clever, self-referential one-liners that whip by almost too fast to catch them, Deathgasm is – like most metalheads/punks/Morrissey fans – a helluva lot smarter than one might at first suspect. Imbued with a very Kiwi sense of humor found in Jackson’s early work, it’s the rare over-the-top horror show that’s also brimming with heart. Even if that heart is being ripped from somebody’s chest.