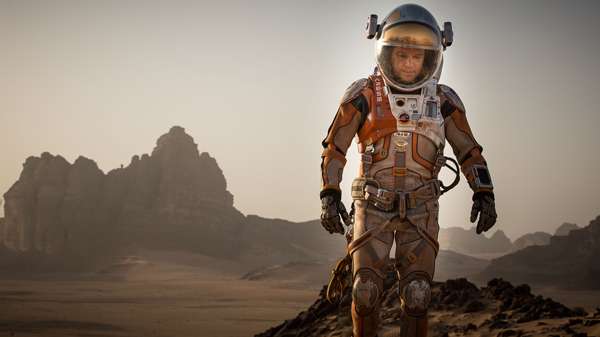 The geek is the hero and not the sidekick in the consistently entertaining The Martian, the perfect summer popcorn movie but for its release in the fall film season. True to Andy Weir’s bestselling sci-fi novel upon which it’s based (the book’s devotees salivate at its mere mention), the film’s protagonist astronaut, Mark Watney, is the imagined offspring of Robinson Crusoe and Angus MacGyver, a can-do optimist who must rely on his scientific wits to stay alive after being left stranded on Mars during an aborted NASA mission, mistakenly presumed dead by his fellow crew members. The ever-focused Watney staves off loneliness and self-pity by engaging in a never-ending conversation with himself (and the audience) that serves both to explain the science underlying his methodical plan to exit the Red Planet (mercifully dumbed down for right-brainers) and to demonstrate that human strength is not only measured by muscle mass, but by brains and sheer determination as well. Through it all, he maintains a sense of humor about himself and his unimaginable situation that’s instantly ingratiating, bad jokes and all. Watney may claim to detest the disco playlist that’s his only source of musical diversion, but make no mistake: “I Will Survive” is this man’s theme song.

It’s a role tailor-made for Damon, who beautifully expresses a range of nuanced feelings without (thankfully) resorting any hand-wringing theatricality. His concentrated performance is close to perfect; you can’t imagine it played any differently. The entranced audience isn’t the only one rooting for Watney’s safe return in The Martian. The around-the clock efforts of the folks back home to rescue him parallel his day-to-day existence on Mars, the narrative shifting back and forth until it concludes in an improbable interception in space that runs high on emotion, with the eyes of the entire world watching in hopeful anticipation. (Try to remember to breathe during the film’s lump-in-the-throat finish.) Veteran director Ridley Scott (Alien) exhibits an assured hand here, proving once again his dexterity as a filmmaker. (The man is 77 years old and hardly slowing down!) While there are a few loose ends in Drew Goddard’s screenplay, which is faithful to but necessarily less detailed than its source, the film is a triumph of storytelling, a tribute to the power of the crowd-pleaser. To borrow from the tagline of another Ridley Scott movie set in a desolate cosmos: In space no one can hear you cheer.