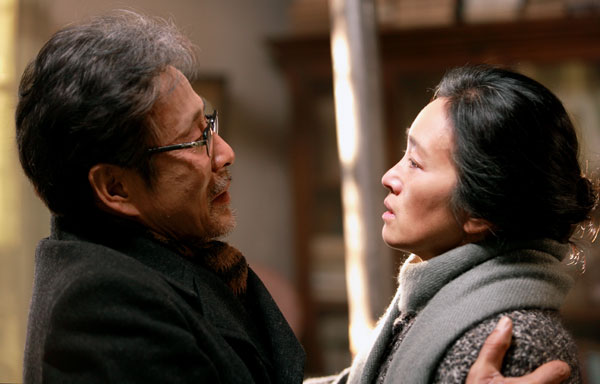 Set against the gray backdrop of Mao’s Cultural Revolution, this is old-school melodrama writ big from a director who’s probably better known to mainstream American audiences as the man behind the spectacular Wushu action epics Hero, House of Flying Daggers, and Curse of the Golden Flower. Those familiar with Zhang’s earlier, darker arthouse fare (Raise the Red Lantern, Ju Dou) will instantly recognize this as a return to the director’s more personal themes of emotional loss and physical (and historical) deprivation. Reuniting with his early-career muse Gong Li seems to have revivified Zhang’s ability to tell small, personal stories backgrounded by world-shaking events that also function as effective commentaries on, or critiques of, contemporary Chinese life and politics.

In essence a story about a family undone by state forces beyond their control, Coming Home is every bit the solemn, sad tearjerker, complete with a hankie-necessitating score by Chen Qigang and compositionally emotive cinematography from Zhang’s longtime cinematographer Zhao Xiaoding. You want sorrow? Zhang delivers.

University professor Lu Yanshi (Chen) is technically married to Feng Wanyu (Gong), but he’s been imprisoned for unspecified crimes against the Chinese state and had been sent off for “re-education” some years prior. Feng, a schoolteacher, has meanwhile raised their daughter Dan Dan (Zhang Huiwen) alone. Unlike her parents, Dan Dan is a gifted ballet dancer in the People’s Republic of Pirouetting with Rifles. Having spent her entire life engulfed in the haze of party propaganda, she’s a teenage true believer, which, as everyone knows, is the most dangerous kind. When Lu manages to escape from prison and tries to return home, he’s spotted by Dan Dan who, in thrall to the party, informs on him, thwarting the reformation of the family.

Zhang’s staging of Lu’s recapture in a crowded train station is devastating. Hiding beneath a filthy staircase, his bespectacled eyes searching the throngs above for a sign of his wife, Lu throws caution to the wind, crawls out, stands up, and begins shouting his wife’s name. High above on a pedestrian overpass, Feng finally spots him, and so do the waiting police. Back Lu goes, to prison, until the Cultural Revolution is over and he is exonerated. But worse awaits. When Lu finally returns home, Feng doesn’t recognize him as her husband. An accident on that terrible day in the train station has left her an amnesiac; now she pines for her missing husband even as he stands before her.

What would surely have been pure, grandiose schmaltz in lesser hands is instead achingly moving familial drama here. For a film with only three main players, Coming Home feels gargantuan in its emotional toll on the characters and audience alike. Gong Li remains one of the Chinese cinema’s greatest assets, and she’s matched here by Chen, while newcomer Zhang Huiwen imbues Dan Dan first with fierce party spirit, and later a hollow-eyed humility in the face of her father’s ultimate homecoming. It’s rarely more brutally true than here: You can’t go home again, or at least not to the same home you left. 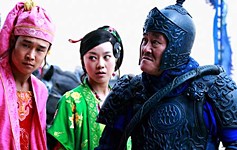 A Woman, a Gun and a Noodle Shop
Surprisingly, Zhang Yimou's Chinese remake of the Coen brothers' debut film, Blood Simple, winds up something of a limp noodle.