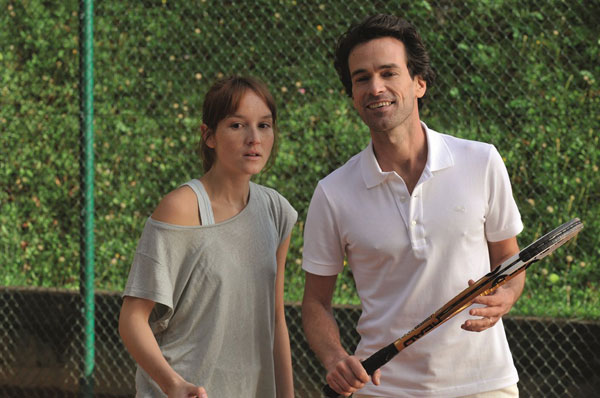 The New Girlfriend begins with the arresting image of lipstick being applied to a pair of voluptuous female lips. Richard Wagner’s Bridal Chorus pipes on the soundtrack while the woman, her face now in extreme close-up with eyes wide open, remains motionless as a white veil is pulled over her face. Then a hand enters the frame and gently closes this mysterious beauty’s eyelids. As the camera pulls back, we see that this is no wedding – the woman is being readied for her funeral. Director Ozon, who made an unforgettable splash with 2003’s Swimming Pool, a movie that deals with fluid, disconcerting questions of sexual identity and desire, works a thematically similar trick in The New Girlfriend. This time, though, it’s cut through with nervous laughter and an initial vibe that brings to mind the earlier works of Brian De Palma at his most Hitchcockian, and, eventually, Hitch’s masterpiece of lost love and l’amour fou, Vertigo.

The corpse is Laura (Besco), who has left behind her husband David (Duris) and their newborn daughter, Lucie. But the tragedy of a young life abruptly cut short transcends the bounds of blood to include Laura’s lifelong best friend, confidante, and Lucie’s godmother Claire (Demoustier), who now resolves to help both herself and David through the loss of their mutual loved one. Ozon uses an economical but excellent flashback montage to allow us to discover the origins of Laura and Claire’s extraordinary friendship, and then returns to the wracking grief and emotional displacement of the present, wherein all manner of surprises – not least the myriad meanings inherent in the film’s title – await.

Out for a jog one morning, Claire finds herself drawn to widower David’s suburban house. It’s apparent on her face that she didn’t consciously intend to drop in, but there she is, so she knocks on the front door, which is unlocked, and, hearing little Lucie crying, enters. What she finds is why I mentioned De Palma earlier: A blond woman is sitting on the couch with the baby, but her back is to the audience. Announcing herself, the mystery nanny turns, startled, and in turn startles Claire and the viewer: It’s David, in full drag, makeup, motherly housecoat and all. You can’t help but suspect the worst – or at least the strangest, echoes of Norman Bates included – seeing David caught unaware, clad in his dead wife’s clothes, but Ozon plays it straight (no pun intended). After explaining his penchant for and history of cross-dressing, David and Claire eventually enter into a relationship that’s both supportive and decidedly risky, creating a new persona for David – dubbed “Virginia” – and straining Claire’s relationship with her husband Gilles (Personnaz).

It’s relatively easy to peg The New Girlfriend as another of Ozon’s uniformly fascinating psychological thrillers, but the script, adapted by the director from a short story by Brit author Ruth Rendell, has moments of modest humor amidst what might otherwise be a considerably grimmer tale. Duris and Demoustier are excellent in a pair of exceedingly complex and emotionally fractious roles, and Ozon’s supremely confident directorial hand and clear affection for these characters transforms The New Girlfriend from a could’ve-been psycho-thriller into a smart, humanistic examination of identity reshaped in the shadow of grief.