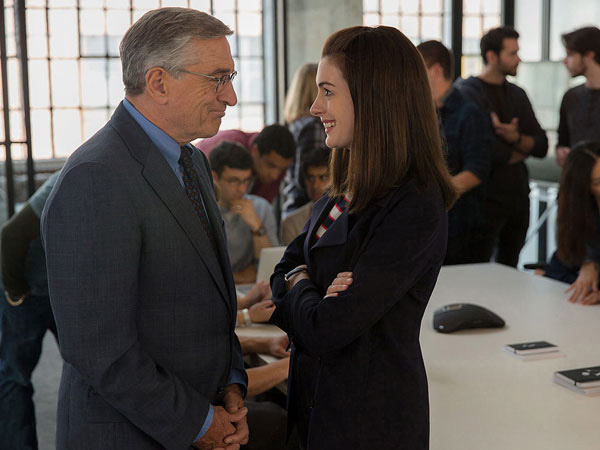 Playing a 70-year-old seeking renewed purpose as an intern at an Internet start-up, Robert De Niro is gentle as a kitten. Is it disrespectful to want to greet this icon of American cinema with a snuggle and a tumbler of warm milk?

Nancy Meyers has certainly been accused over the years of making excessively snuggly movies. But she doesn’t get enough credit for smuggling the occasional rusty nail under the covers. The Intern falls in line with the films she made first as a screenwriting partner to Charles Shyer (Baby Boom, Father of the Bride) and then as a solo writer/director (Something’s Gotta Give, It’s Complicated). It’s a body of work that marks three decades of soft-focused cinematic takes on topics du jour: the working mom, the empowered divorcée, senior sex. Meyers has always been savvy about what’s trending, and long before somebody invented a word for it.

Of course, savvy is not the same as insightful, and Meyers’ m.o. – an exceptionally profitable one – has been known to dress her films like a Pinterest wall of ideality, a save-to-shopping-cart vision of aspirational living. (Come for the A-list actors, but leave mulling a farmhouse sink.) The Intern’s main staging grounds – Brooklyn brownstones and a converted warehouse space – provide plenty of ammunition for a Pottery Barn trigger finger. Everyone here is dressed and pressed way too nicely, most especially Anne Hathaway’s Jules, who runs the Internet fashion company that De Niro’s senior citizen Ben comes to work for. But once you get past the film’s overwhelming well-appointedness – and its har-de-har first entrée into the story of a techno-yearling finding his legs in his 70s – what emerges is a compassionate picture of two like-minded people driven to put in a good day’s work.

Ben, bored by retirement, wants only to be useful again, and he lucks into a role as right-hand to Jules just as her position in the company she founded is threatened by its investors’ desire to bring in an experienced CEO. There are some comical set-pieces borne out of the age gap, and likable enough supporting players who underline the lessons one might learn from an old-timer; I didn’t laugh all that hard at it, but the preview audience did. I was more struck by the film’s attempts – rudimentary but genuine – to talk about Jules’ struggles with balancing the professional and personal. (Meyers didn’t make up the word “monogamish” but it’s the first time I’ve heard it in a studio film.) By the third act, the comedy flies out the window to give the floor to teary monologues wherein actors recite exactly what you’d want to hear in your dream life. It’s all a well-dressed fantasy, sure, but at least the conversation is unique. 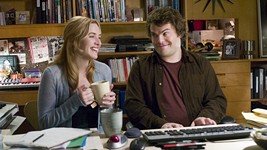