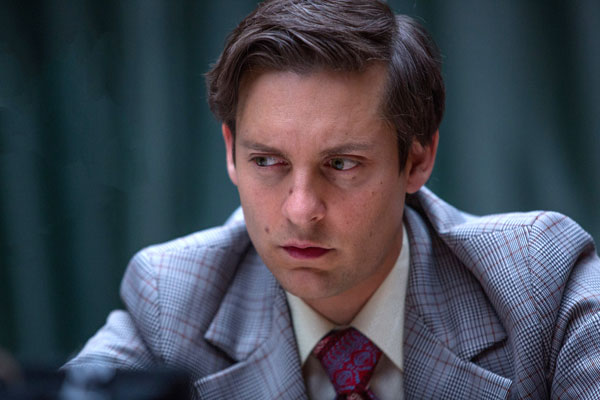 You don’t exactly have to go searching for Bobby Fischer in this fictionalized account of the chess master’s world championship bout against the Soviet Boris Spassky – Fischer fills nearly every frame of the film, from nervous boy genius to troubled teen genius to paranoiac racist adult genius. Tobey Maguire plays him in this latter incarnation. Historically, he’s an aloof actor, so often playing an outsider (The Cider House Rules, Sam Raimi’s Spider-Man pictures), and he can finesse that remoteness, perforate it like cheesecloth; intelligence, soulfulness have a manner of slipping through. But the Fischer character is drawn, by the actor and filmmakers alike, as a cipher. Try to sift the aloofness and all you find is more rock-hard impenetrability.

Director Edward Zwick makes movies that require heroes, like a rebel freedom fighter (Defiance, Glory) or a lovesick cowboy (Legends of the Fall). He hasn’t adjusted his approach to accommodate a central character that can’t cross the board like a conventional hero. Pawn Sacrifice pushes through the decades with a Forrest Gump-like gloss on history – cue the archival footage reel set to a Top 40 tune – and celebrates the conclusion of the Spassky-Fischer match with a montage of Americans celebrating at home, including the kindly hooker who deflowered Fischer and the mom that abandoned him (and the film abandoned in kind). It’s Hollywood hokum hugged around a sour little arthouse movie trying to chew its way out.

Zwick gets good work out of his supporting cast, including Michael Stuhlbarg as Fischer’s much-abused agent and Peter Sarsgaard as his mentor, a Catholic priest; they’re tiptoeing through the same minefield but take different steps around Fischer’s increasing demands and conviction he’s being spied on. Best yet is Liev Schreiber playing Spassky, big as a Russian bear and as ice-cool as the country’s signature 80-proof spirit. Is it unpatriotic to wish this was his movie, not the twitchy American guy’s?