Too soon? It might be for a crime drama about the notorious South Boston gang leader James “Whitey” Bulger, currently serving two consecutive life sentences, plus change, for his involvement in 30-some criminal acts including extortion, racketeering, and murder. (Joe Berlinger released a documentary account of his trial, Whitey: United States of America v. James J. Bulger, last year.) Fictionalized depictions of murderous crime bosses have a little rope to play with; the distance from true-life means a filmmaker doesn’t have to be squirrelly about exploring the man inside the monster of a Michael Corleone or The Departed’s Frank Costello (reportedly inspired by Bulger). It’s only a movie, right? But Bulger’s reign of terror is still fresh in the minds of his victims (or their families, in the case of those he had executed). By necessity, Black Mass begins in a hole it can never dig out of. It’s the portrait of a monster told in a flat line.

But the canvas is much broader; initially, Johnny Depp’s Jimmy Bulger is hiding in plain sight. He’s not exactly inconspicuous – not with his cadaverous makeup, receding hairline, and icy blue contacts (the pinpoint pupils may be his chillingest attribute). But he doesn’t have a lot to do at first. The boon of that is that the generously scoped script (by Mark Mallouk and Jez Butterworth, based on the nonfiction book by Boston Globe journalists Dick Lehr and Gerard O’Neill) gives a lot of face time to the supporting cast. The film opens with one of Bulger’s corrupt lieutenants giving evidence against his old boss. He’s played by Jesse Plemons, continuing his post-Friday Night Lights ascendancy into one of his generation’s slyest and most startling character actor talents, and director Scott Cooper gets great performances out of Bulger’s other goons, too, including Rory Cochrane, W. Earl Brown, and a deliciously unhinged Peter Sarsgaard. None of them are strictly movie-star pretty, and their hard-earned wrinkles and pockmarks flourish under director of photography Masanobu Takayanagi’s frequent extreme close-ups.

Less successful is the sprinkling of famous people in bit parts. Oh hey, it’s Kevin Bacon, and did Adam Scott really need to grow a mustache just to stand around for reaction shots? They both work for the FBI, as does Joel Edgerton’s John Connolly, a Southie boy who becomes Bulger’s handler – and enabler – when he turns informant. Black Mass evolves into a dual narrative of these two men, but Connolly’s depiction suffers from the same flatline-itis. In theory there’s an arc there – the fall from grace of a once-reputable lawman who becomes the protector of a psychopath – but Edgerton’s performance is one-note. If there’s an internal struggle to his FBI agent, we don’t see it.

What we do see, late in the film, is a masterful stretch of scenes that finally gives Depp something to do other than whack people. (Rightly, the film doesn’t mince on the violence, but it curiously doesn’t bother with the actual day-to-day operations of Bulger’s criminal empire, nor does it try explaining Bulger’s deepening interest in the IRA.) In these three scenes – in a car, interrogating a call girl; at a dinner table, playing cat to a mouse; and in a doorway, terrorizing Connolly’s wife with a whisper – Depp dials into the man’s malevolent charisma and canniness. The connection is clear as a bell, and it’s as good as anything he’s done in a decade. If only the film could have sustained the momentum, or found a way into feeling not just showing Bulger’s dark depths. There’s a scene near the conclusion, when Bulger places a farewell phone call right before he skips town to escape the feds. The moment is meant as some kind of end punctuation, but it’s more like an ellipsis, a nod to another avenue introduced but not satisfyingly explored. In the case of the sprawling yet incomplete Black Mass, it might not be just too soon, but too much. 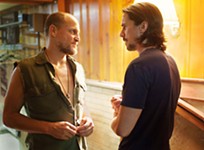 Out of the Furnace
The writer/director of Crazy Heart returns with an all-star cast for his sophomore effort, which takes place amid the rusted-out lives of America's steel belt.