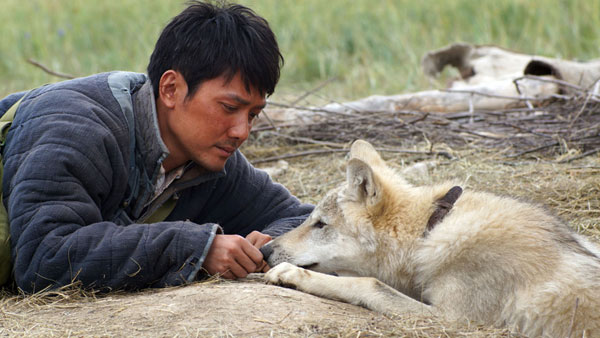 Set in the early years of Mao’s Cultural Revolution, during which millions of hale and hearty Beijing students were sent out into the Chinese hinterlands to teach the “peasants” how to read, write, and increase agricultural production (famine raged in the east), Wolf Totem is less concerned with the politics of the day than it is with showing us the breathtaking beauty of the Mongolian steppes. French director Annaud is a dab hand at this sort of thing, having previously helmed the 1988 ursine crowd-pleaser The Bear and 1997’s Seven Years in Tibet; he’s modern cinema’s Jack London, frequently pitting man against nature against man.

Adapted from Jiang Rong’s novel, Wolf Totem tells the story of the enthusiastic young teacher Chen Zhen (Feng, excellent), sent by the government in 1967 to the grasslands of inner Mongolia to spread the Joy of Mao. Eager and outgoing, he becomes a part of the nomadic horsemen – the “brigade,” as his superiors refer to it – and soon becomes, as he says, “truly one of [them]. Chen Zhen is also fascinated by the interplay between the Mongols’ sheep herding, the wolf pack that preys on the free-range gazelles (and the occasional sheep), and how the locals view the entire enterprise as a holy circle of life. Chairman Mao famously said that “a revolution is not a dinner party” but an “insurrection” and “an act of violence.” Annaud focuses on the revolution burgeoning within Chen Zhen, who becomes so enamored of the wolves that he steals a pup that he hides in a makeshift burrow outside of his yurt. Chaos, both bureaucratically man-made and natural, ensues.

Cinematographer Jean-Marie Dreujou has shot the ridiculously photogenic grasslands in truly spectacular IMAX 3-D, and rarely have I seen it done better. James Horner’s rousing score highlights both lupine and equine action. But the true stars of Wolf Totem are those magnificent wolves. The film’s seven-year production schedule – involving a pack of real Mongolian wolves, some 200 horses, and 1,000 sheep (imagine the logistics, if you can) – brings the viewer deep into the action. My only complaint is that Annaud and his co-screenwriters have front-loaded Wolf Totem with too many subplots: a romance, annoying bureaucratic machinations from on high, and Chen Zhen’s sometimes confusing allegiances. Really, just watching as those wiry, noble wolves rush headlong across the steppe in glorious IMAX 3-D would have been more than enough. 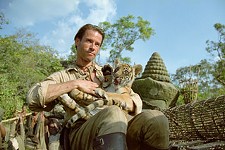 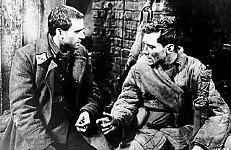