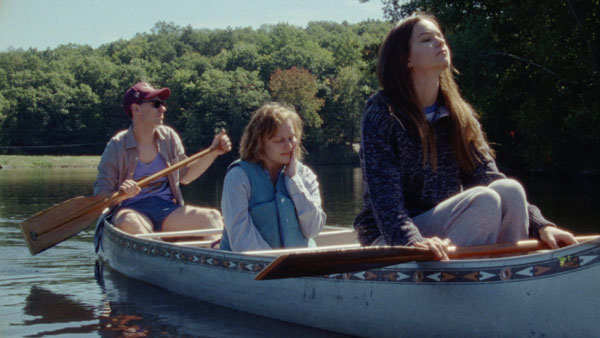 Writer/director Alex Ross Perry’s latest film opens with a static close-up of Catherine (Moss), tears and eyeliner running down her anguished, blotchy face. Her boyfriend, James (Audley), has just broken things off, confessing to an affair, and Catherine lashes out at him, before finally screaming, “Go!” as the title credit appears over her face in a stylishly calligraphic pink font reminiscent of Polanski’s Rosemary’s Baby. It is a naked, unsettling scene, and it immediately positions Queen of Earth in that subgenre of films, popular in the Sixties and Seventies, of a woman’s descent into madness. In the aftermath, Catherine reunites with her childhood friend Virginia (Waterston) at Virginia’s family’s elegant lake house for what we learn is an annual tradition for the two. We also learn that Catherine’s father, a prominent New York artist, committed suicide a few months back. Abandoned by “the only two people who really cared about me,” Catherine seeks solace in the idyllic setting and the companionship of Virginia. It quickly becomes apparent that the film has other plans.

Perry (Listen Up Philip, The Color Wheel) intercuts the present day with scenes from the previous summer’s retreat when Catherine was cocky and confident, self-absorbed Virginia the one suffering from some undisclosed emotional trauma, and miffed that Catherine has brought James along to foil the wound-licking. This juxtaposition of the two summers drives the film and fleshes out the women’s antagonistic relationship. In the year between their annual sojourn, Catherine and Virginia have switched positions, and the way each has become the mirror image of the other calls to mind an updated version of Ingmar Bergman’s Persona. As the pair spit back lines the other has previously said, the proceedings are complicated by Rich (Fugit), the literal boy next door and Virginia’s fuck buddy, who, with vague menace, randomly appears to further drive a wedge between the two.

Moss is stunning as Catherine, giving a fearless, compelling performance, and Perry yet again demonstrates his versatility as a director. The filmmaker’s riff on these cinema tropes is spot-on, with special mentions to editor Robert Greene, whose fade-to-black scene endings and deftly disorienting cuts between times are unnerving, and Keegan DeWitt, whose ominous soundtrack, sometimes single piano notes, other times a mix of chimes and discordant clarinets, perfectly complement Catherine’s unraveling. The film can be a bit too oblique at times, as Perry holds back some puzzle pieces, but that’s part of the tradition. This is a lovingly rendered, feel-bad chamber piece chock-full of elliptical psychodrama. Disney recently tapped Perry to write the screenplay for a live-action update of Winnie the Pooh. Can’t wait. 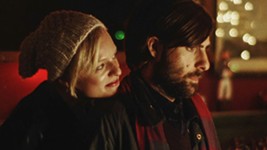 Listen Up Philip
The director of The Color Wheel is back with this film about a narcissistic and abrasive young novelist.