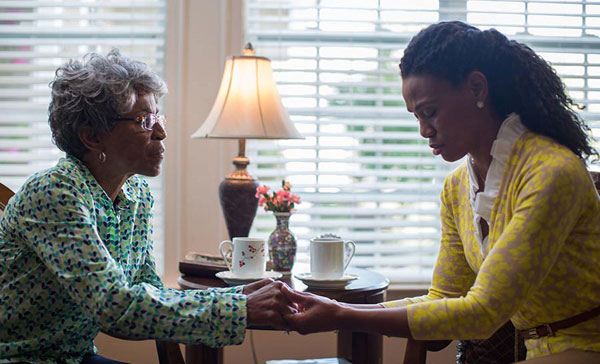 If nothing else, this Christian melodrama presents a novel idea for home renovation. How many of us have looked at the master closet and thought, wouldn’t this make a cozy prayer space? Only in this film’s tortured metaphor, a prayer space is a “war room,” and penitents are enlistees in God’s army against the devil.

Miss Clara (Abercrombie), a tiny but feisty, fire-breathing widow, is the one who cooks up the war room concept, presumably inspired by her late husband’s career in the Army. Miss Clara passes along the idea to her realtor, Elizabeth (Shirer), who is unhappily married to a sourpuss pharmaceuticals rep named Jordan (Stallings) and somewhat absent-mindedly raising their cowed young daughter (Pitts, in an understated and touching performance). Miss Clara’s advice – and plainly the argument of filmmaker duo the Kendrick Brothers, too – isn’t for marriage counseling, or that Elizabeth might make the not-unreasonable demand that her husband keep her abreast of his travel plans and not make eyes at a comely woman across the aisle at church. Nope, the solution is to pray hard and ask God to do the rest.

I lodge no complaint against the film’s emphasis on prayer, even if, dramatically, it’s not scintillating stuff to watch. (Solo prayer to me is a lot like nose-picking; plenty of people do it, and more power to ’em, but it’s an intimate act best left to you and your god. Still, the many scenes on bended knees beat a hokey-as-hell nightmare sequence, or the one where Elizabeth roams the house shouting down Beelzebub.) The filmmakers are upfront about their religious intent, and it follows that their audience is a targeted one. But the Kendricks have further limited that audience by presenting an emphatically anti-feminist picture of faith, repeatedly underscoring the idea that a woman must be submissive to her husband. I’m no expert on warmongering, but alienating half your army doesn’t seem like sound strategy. 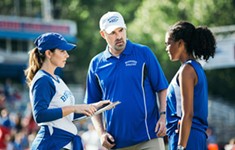 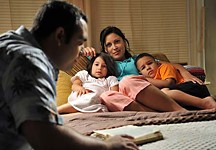 Courageous
In this faith-based drama from the makers of Fireproof, four policemen struggle with their roles as husbands and fathers.