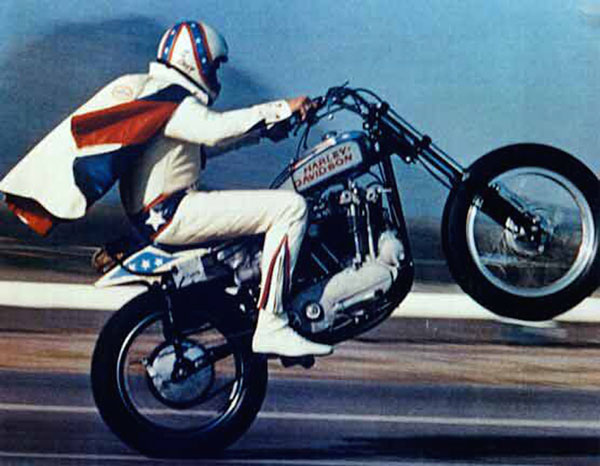 If you grew up in the Sixties or Seventies, it sometimes seemed as though Robert “Evel” Knievel was everywhere. Granted, there were only three television channels and zero Internet, but Knievel – a legendary motorcycle daredevil, showman extraordinaire, and the original, iconic template for every lunatic act of gravity-defying bravado-cum-stupidity – had an outsized influence on America’s action-oriented cultural psyche. Everyone from Johnny Knoxville (a producer of this film) and his Jackass brigade to the airborne BMX and skater-centric X-Games owe him their very existence. The American public has always had a love affair with crash-and-burn, gasoline-fueled superstars, be they backwater demolition derbies or NASCAR and Formula 1. The ruggedly handsome and virtually indestructible Knievel – he’s listed as having the most bones broken in his lifetime in the Guinness World Records – remains the bloodied and battered father of modern, non-Olympic, crazy-horsepower spectacle. (Like every Seventies proto-geek kid, I owned Ideal Toys’ Evel action figure and stunt cycle. Predictably, I launched it off the roof with an M-80 Scotch-taped to li’l Knievel’s backside. There were no survivors.)

Junge’s ridiculously entertaining documentary includes a wealth of archival clips that still, after all these years, make you wince. There’s Knievel in 1967, attempting to jump the fountains at Caesars Palace in Vegas. Filmed by director John Derek (Bo’s future husband), the stunt goes horrifically awry, with Evel looking every bit the doomed rag doll tumbling across the pavement (crushed pelvis, concussion, multiple fractures). Then there’s his much-ballyhooed Grand Canyon jump which, thanks to the legal and liability issues (good call, Feds), never materialized.

Junge traces “the last gladiator”’s hardscrabble roots amidst the coal-mining, alcohol, and fisticuffs of Butte, Mont., to his early deal with Honda motorcycles, which led him to touring the country performing risky tricks for crowds that cheered for the failures as much as they did for his triumphs. That the man in the red-white-and-blue jumpsuit was a narcissistic egomaniac with some serious anger and booze issues is something Being Knievel makes abundantly clear through interviews with his longtime wife Linda and the various outsized characters who orbited his mercurial world. That’s not much of a surprise, and, in the end, Junge’s doc is less fascinating for revealing the beast behind the hero than it is for providing a cohesive and – you can’t deny it – action-packed summation of one of the most American of bat-shit crazy celebrities ever to attempt to ride a rocket-powered missile across Idaho’s Snake River Canyon.