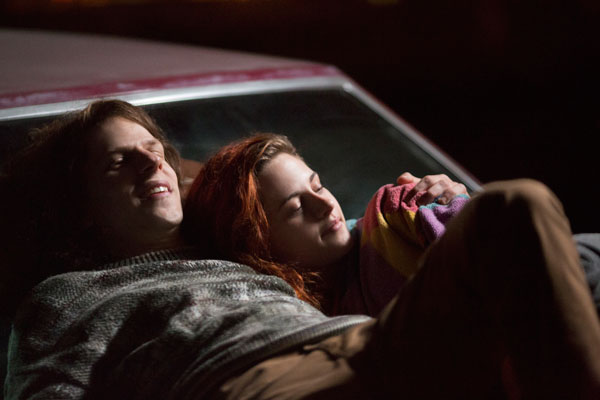 What if a young Woody Allen had been cast as stony Jeff Spicoli in Fast Times at Ridgemont High, and then the whole thing was rewritten as a Jason Bourne action film? Somewhere in the multiverse that exact movie exists, but until quantum is our bitch, we’ll have to settle for American Ultra.

You can see the high-concept cleverness of screenwriter du jour Max Landis all over this initially engaging slice of stoner action rom-com (surely the nichiest geek subset yet explored). Halfway through, though, the film’s twinned tones of hapless, ganjafied anti-heroics and pink-misted ultraviolence turn into a haze of repetitively bloody set-pieces. By turns sweet, sadistic, and silly, American Ultra will probably make a stronger impression if you watch it while high.

Eisenberg is surprisingly well-cast in this less-than-serious role, and he uses his shaggy mane and mumbled dialogue to fine effect as Mike, a perpetually buzzed nebbish who suffers from crippling panic attacks and assorted neuroses alongside his long-suffering, co-stoner better half, Phoebe (Stewart). No spoiler here: Turns out Mike’s actually an amnesiac, deep-cover experimental death machine for the CIA – but not an actual Terminator, as he relentlessly worries. Soon enough, leggy Agent Lasseter (Britton) arrives in town to “activate” him while power-mad Agent Yates (Grace, killing it) sends hordes of fully automatic American ninjas to wipe Mike off the face of Nowheresville, USA. Shoot, rinse, repeat.

Director Nourizadeh previously gave us the extremely trippy, hugely entertaining, teen chaos theory of Project X, and Landis penned 2012’s whip-smart, adolescent, dark wish-fulfillment fantasy Chronicle, so why did American Ultra leave me feeling like I just scarfed down some mega-lite Crapa-Cola and a ginormous bag of gluten-free, brownish-flavored Crud-a-roos? Because American Ultra’s first half supersedes its second half, and thus the film has nowhere to go and nothing that’s not telegraphed early on. What kicked off as a bong-on idea for a tale of two tokers in love and peril turns out to be just another genre-mashing shoot-’em-up with a dark, romantic secret at its heart. Not a bad trip to the movies if you can pull yourself up off of that Cheetos-encrusted couch, but also not anywhere near as subversively adept as what you’d hoped for. 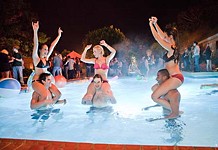 Project X
In the vein of John Hughes, this movie celebrates that innocent time of life when a badass backyard party is the ultimate key to social success.