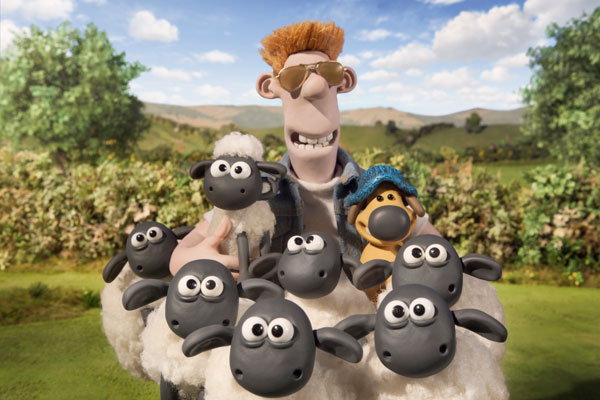 The stop-motion animation may be retro and the storyline sentimental, but it’s those quaint throwback qualities that make Shaun the Sheep Movie one baaaaaadass movie. Uncompromising in its simplicity, the film refuses to follow the flock of flicks that cater to a generation owning smartphones and swallowing Ritalin before entering kindergarten. There’s something refreshing about the old-fashioned way in which it entertains, a mix of silly slapstick and sight gags combined with a gentle heart. Initially featured in Nick Park’s Oscar-winning Wallace and Gromit short “A Close Shave” nearly 20 years ago, our titular hero (voiced by Fletcher) makes his feature film debut here in a tale in which he and the fellow members of the Mossy Bottom Farm mob leave the safety of their rural surroundings and venture out to the Big City to find their amnesiac owner (voiced by Sparkes), who’s become a social media sensation shearing heads in a trendy salon. The inside joke: The Farmer’s hip and happening clients have no idea their stylish pompadours resemble the tuft of fleece atop Shaun’s head, like the human sheep they are.

There’s some great stuff here, like the chaotic scene in a French restaurant (delightfully named “Le Chou Brûlé”) in which Shaun and his woolly crew, masquerading as humans in thrift-shop clothing, haplessly emulate the establishment’s patrons to avoid discovery. Likewise, the introduction of the caged residents awaiting adoption at the creepy Animal Containment Center is equally clever, particularly the cone-collared kitty hissing like Hannibal Lecter and the pumped-up poodle doing bicep curls with a thighbone. There’s no dialogue in the film – ideas are pantomimed, emotions are communicated through grunts and gibberish – but the absence of spoken words is never a liability. What’s ultimately endearing about Shaun the Sheep Movie is its message of loyalty and devotion. The resourcefulness and tenacity with which Shaun searches for the man he once took for granted is genuinely touching; this ovine hero is no little lost lamb, even when he’s out of his element. As an added bonus, animal lovers of all ages will find solace in the hope conveyed here that there’s a home for every domesticated creature on this earth, a place where someone cares for them in return for the love they unconditionally give. Awwwww. Wouldn’t that be a wonderful world?