Ricki and the Flash

Clad in black leather pants, bangles, and dopey braids, Ricki Rendazzo (Streep) fronts an aging house band that plays covers for a sparse but devoted bar crowd in Tarzana, Calif. Pay attention to the geography: The San Fernando Valley is miles from L.A.’s epicenter of rock – where Ricki once hoped to hit it big – and even farther yet from Indianapolis, where her estranged family lives. When Ricki’s adult daughter Julie (Gummer) tumbles into a suicidal depression, ex-husband Pete (Kline) calls on Ricki to return home and conduct some long-overdue mothering.

This Indianapolis stretch plays to the strengths of Streep and Gummer (no need to fake the familial bond – they’re real-life mother and daughter), as well as those of director Jonathan Demme (Silence of the Lambs, Philadelphia) and screenwriter Diablo Cody (Juno, Young Adult). A spiky wit, Cody’s clearly having fun with the snarling ball of unbathed fury that is Julie – she gets all the best one-liners – and Cody and Gummer root out real pathos in Julie’s pain, too. Everything clicks at a deeply uncomfortable family reunion set at a restaurant, with Julie and her two brothers still smarting from Ricki’s long-ago decision to abandon her life as the Midwestern-drab Linda Brummell, wife and mother, to make a go of being a musician. The family dinner escalates into a private meltdown on an embarrassing public stage, and Demme – so exquisite at capturing nuanced character interplay – elegantly choreographs the terrible things these wounded people have to say, and the even worse things they’re only thinking.

And then the talking mostly stops, and the movie stops in its tracks for what feels like an endless run of Ricki and the Flash stage shows and musical montage (ably performed by Streep and a host of seasoned musicians, including Rick Springfield, who plays her love interest). Demme’s filmography is speckled with standout concert docs, and his obvious joy in music – its creation, the collaboration, the showmanship, that invisible thread between performer and audience – comes through loud and clear. But the music so wholly engulfs the second half of the film, there’s no room left to expand on characters that feel less than lived-in or on the film’s more ambitious ideas. (For instance, Ricki’s legitimate complaint regarding gender expectations: Nobody ever dinged Mick Jagger for being a bad dad, so why is she so crucified for following her bliss?) The film drifts away from what made it compelling, and specific, in its first half (including ruthlessly dropping Gummer’s storyline; when she reappears, she doesn’t even get to speak), until finally resolving in the kind of nonsensical grand gesture that feels piped-in from a much broader movie. Still, let it be noted: Meryl Streep, our grande dame of American cinema, looks fierce in black leather. 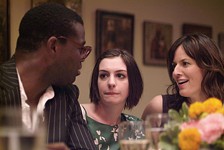 Rachel Getting Married
Anne Hathaway tears up the screen in Jonathan Demme's new film about a self-absorbed woman who wreaks family havoc while out of rehab to attend her sister's wedding.