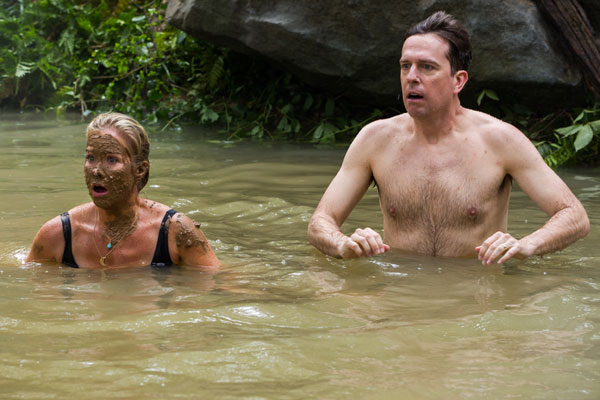 One of the unfunniest comedies it’s ever been my misfortune to see, this Vacation reboot of National Lampoon’s much-loved jaunt from 1983 (which was directed by Harold Ramis from a script by John Hughes, two of that era’s film-comedy giants) chucks the Lampoon’s aegis and all shreds of humor that aren’t malevolent, vulgar, and mean-spirited.

Banking on the nostalgia factor, the filmmakers err in making this an R-rated film. Sentimental adults, therefore, will be discouraged from bringing kids to what easily could have been a genial film about a family outing that might appeal to multiple demographic targets. But, no: Co-writers and -directors Daley and Goldstein (previously screenwriting partners on Cloudy With a Chance of Meatballs 2, Horrible Bosses 2, The Incredible Burt Wonderstone) have instead made something that eradicates any good will that might have accompanied wistful adults into the theatre.

Some examples of how Vacation’s humor curdles? The opening sequence shows the now grownup Rusty Griswold (Helms) at work as a pilot for a discount airline who leaves the plane’s navigation to his senile co-pilot. The next sequence features Rusty coming home to a family squabble during which his younger son (Stebbins) calls his older brother (Gisondo) a vagina – a word that the boys, their mom (a woefully underused Applegate), and dad repeat dozens of times before we’re hardly settled in our seats. The road trip takes place in a Tartan Prancer, “the Honda of Albania,” a shoddy vehicle in which only the most cavalier of parents would allow their families to travel. The blonde in the convertible who distracts Clark Griswold (Chevy Chase) in the original? There’s another vixen in this version, but, well, she ends up as roadkill. A detour to mom Debbie’s alma mater reveals her wild side and lots of vomitus. An off-road excursion to a swimming hole winds up covering the hapless Griswolds in human excrement. A pop-in visit with Debbie’s sister (Mann, underutilized) and her hunky husband (Hemsworth, proving himself totally game) has the vain host walking around inappropriately in his underwear advertising his giant package (a joke that’s initially funny before it overextends its welcome). And, oh yeah … a rustling mishap ends with Rusty covered in cow entrails.

The Griswold elders (Chase and Beverly D’Angelo) show up toward the end for brief cameos, but like most everyone else in the film, they barely register. With any luck, Vacation will barely register, as well. 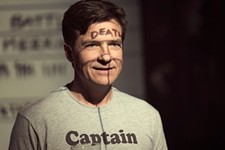 Game Night
Monopoly was never this brutal before this crime-com.