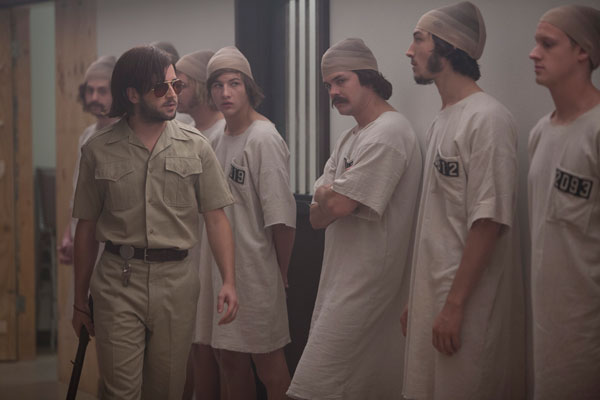 The Stanford prison experiment conducted by Dr. Philip Zimbardo in that university’s basement in 1971 should be familiar to anyone who’s cracked a psychology textbook in the last 40 years. In the study, the subjects (paid student volunteers) were divided into groups of prisoners and guards in a mock penitentiary, with the aim of learning more about the ways in which institutions affect human behavior. The results were – and still are – unsettling, and the experiment, which was supposed to last two weeks, was shut down after six days.

Often using actual transcripts, the film can sometimes feel as clinical as the experiment. Playing Dr. Zimbardo, Billy Crudup behaves like an emotionally detached scientist, watching most of what transpires on a video monitor in another room. In short order, the subjects playing the prisoners feel dehumanized by the treatment they receive and being identified only by numbers rather than names. The guards (somewhat inspired by Cool Hand Luke, which had come out a few years earlier) quickly go power-mad and treat the prisoners with harshness and brutality. We, along with Zimbardo and his staff, continue to watch from the safety of another room.

Tim Talbott’s script, which won the screenwriting award at Sundance, provides a lot of meaty roles for young actors (Mann, Miller, and Sheridan make particularly strong impressions). However, it offers no insight into the ramifications of the experiment or the lessons learned from it. Alvarez directs in a straightforward manner that feels as compelling as watching an accident unfold in real time. The viewer begins to feel like Zimbardo when he replies, “Let’s see where this goes,” every time his colleagues suggest pulling the plug on the experiment. Zimbardo’s colleagues and girlfriend (Thirlby) are barely sketched out as characters, and sometimes leave confusion in their wake. The same goes for a sequence in which a priest comes and talks to the prisoners. Is the character real or a setup? What we witness onscreen is horrifying and deeply disturbing (as it should be), but a little more context might help us to not feel so marooned.