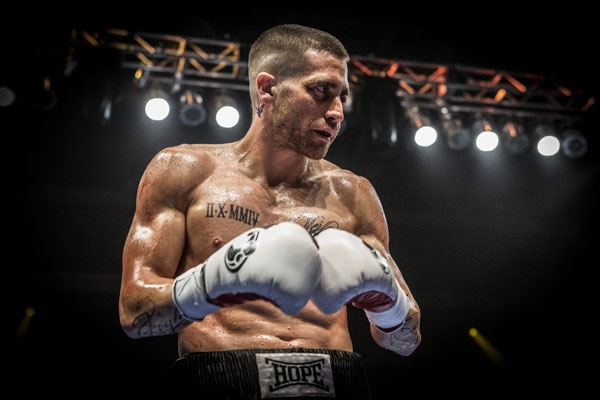 The flesh is always willing – and the camera is, too – in this otherwise familiar movie about the comeback of a champion boxer. The sharp performances and committed cinematography elevate this stock drama to something beyond routine. Always engaging, the film’s punches connect with the viewer and make Southpaw a contender if not a champion among boxing films.

Jake Gyllenhaal puts his chameleonlike acting skills to good use as the bulked-up boxer Billy Hope. (Following his heralded turns as the squirrelly paparazzo in Nightcrawler and the muscular cop in End of Watch, Gyllenhaal’s preeminence for using his body as a narrative tool is beyond dispute.) Playing Billy’s wife Maureen, Rachel McAdams delivers a strong and edgy performance as well. The two are childhood sweethearts, and have been shaped by growing up in New York’s Hell’s Kitchen as kids shunted around in the foster-care system. But as Southpaw starts, Billy’s on top of the boxing world, winning the light heavyweight belt at Madison Square Garden. The Hopes live in a mansion with their daughter Leila (young Laurence, also delivering a terrific performance) and all the trappings of wealth. Then, all too quickly to be fully realistic, the bottom falls out, and Billy’s back at the bottom of the heap. Some self-reckoning is in store, followed by a second chance – but Billy will only accept the bout if he can convince gym owner Tick Willis (Whitaker, working in a noticeably different register) to be his trainer. Ultimately, Billy has to learn to channel the aggressive instincts that made him successful in the ring into becoming a boxer who uses intelligence and strategy to beat his opponents instead of brute strength.

The screenplay by Kurt Sutter, creator of TV’s Sons of Anarchy, offers little that we haven’t already seen in the Rocky saga, Requiem for a Heavyweight, Raging Bull, Million Dollar Baby, and dozens of lesser boxing dramas. The trajectory is almost always the same throughout these films. What distinguishes them is the manner in which they’re done. Add to the spot-on performances in Southpaw 50 Cent’s flawless delivery as a boxing promoter and Billy’s manager. “If it makes money, it makes sense,” is his emotionally detached mantra. Also practically flawless are the numerous fight sequences, which Fuqua’s cinematographer Mauro Fiore films in a fly-on-the-ropes fashion. The sequences seem continuous rather than choreographed and give viewers the sense of sitting in the front row with the fight judges and swells. Adding to the verisimilitude is Fuqua’s use of genuine boxing announcers and referees, who already know what to do in the ring. Eminem (who was originally tapped to play Billy Hope, but declined) contributes the film’s fight song “Phenomenal,” while the music score by the recently deceased James Horner gently layers the film with a warm ambience. Ultimately, Southpaw may not punch above its weight, but the film has an aim that’s true.