The well-intentioned but thin Paper Towns thematically charts familiar Young Adult territory (unrequited first love, high school’s bittersweet end, the politics of teenage friendship) like an explorer oblivious to the fact that he’s not the first guy to arrive. Based on the 2008 novel by John Green, author of the far superior YA weepie The Fault in Our Stars, the film recounts the adolescent enlightenment of an affable high school senior, Quentin (Wolff), who’s nursed a lifetime crush on the girl living across the street, the self-assured Margo (Delevingne). One night, she crawls through his bedroom window to enlist his help in exacting PG-13 vengeance on her cheating boyfriend and complicit friends, yanking this childhood friend from his play-it-safe comfort zone and reinvigorating his hope for a requited love (finally!) in the process. But Quentin’s euphoria soon dissipates upon learning that his partner in quasi-crime has vanished without explanation. Convinced she’s purposely left clues to her disappearance that will lead him to her – after all, their something-wild moment together was real in his mind – Quentin and a few friends embark on an impromptu road trip from their hometown of Orlando to a paper town in upstate New York, where he confidently believes she waits. It’s a journey due north that ultimately goes south, for both Quentin (until, at least, his interminable voiceover epiphany) and the remainder of the movie.

Metaphors abound. A “paper town” is a fictitious settlement on a map used to identify copyright infringements, but the above-it-all Margo uses the term here to criticize the middle-class life to which Quentin aspires. This condescending attitude might play if Margo possessed a crazy charisma that blinds others’ ability to see through her, but the badly miscast Delevingne communicates nothing to suggest the sway she holds over her lovesick admirer. She’s an enigmatic blank page, a paper actress in a paper movie. And quite frankly, it’s hard to completely accept the up-and-coming Wolff as a total geek with no social or love life. With those puppy-dog brown eyes and enticing grin, the guy exudes intelligence and charm from top to bottom of his lanky frame. Up until now, the actor has shined in secondary roles (including the film version of the aforementioned Fault), but in Paper Towns he proves he may be the next prom king. 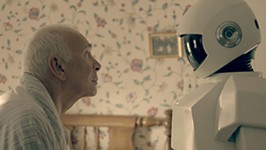 Robot & Frank
This weird, winning little movie explores what happens to the essential self as the memory goes.